Skill and Competence as a Requirement

Skill is deployed in many fields of human endeavour

Football takes skill. I played football at the same time as did Rodney Marsh, Denis Law and Colin Bell. They were footballers; but I was not.

Why not? Because, although I know and adhere to the rules of the game, and can make a pass or control the ball to a certain level, my competence is not what is required to say of anyone that he or she is a footballer. I do not have the skill.

Getting by, speaking Spanish in a bar in Madrid; or speaking French in a bar in Paris, is accepted by the Spanish and the French, respectively. Indeed, it is welcomed and found charming; but it does not make the speaker of pidgin Spanish or pidgin French a competent speaker of one or the other.

To call oneself a language speaker requires a competence that, within agreed limits, marks one out as fluent. If fluency is a vague term, we must learn to live with it.

Being a footballer, a foreign-language speaker, or a fine artist, requires of each that she has mastered a competence in the activity under scrutiny. In each case, she will have become so immersed in the activity as to be able to live and breathe within its compass. She will have accrued dispositions that make playing, speaking or painting, a second nature.

But what is the compass of an activity and how is the (second) nature of a disposition embedded?

We should use the notion of a disposition to better explain the nature and range of a competence. There are, for instance, things that I know and things that I believe that, whilst part of my mental constitution, are nevertheless beneath consciousness. ‘There is nothing it is like’ to believe that blue is a darker colour than yellow.

In the television quiz game ‘Who Wants to be a Millionaire?’ the preliminary round sees several contestants having to arrange in order a series of objects or events. This could be, for instance, to put in order of weight from lightest to heaviest the following: A – ounce; B – Ton; C – Stone; D – Kilogram. The first person to key in A,D,C,B, is then selected to enter the competition proper. 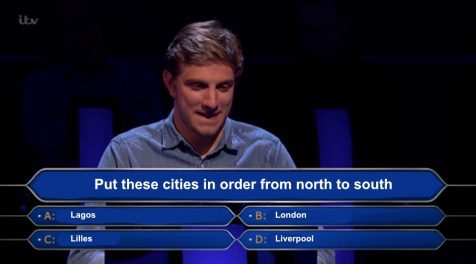 This is a composite picture and not one used in the actual quiz show. In devising it I picked four cities, each beginning with ‘L’, and each easily located in the north-south continuum. However, the attraction of the show, at least in part, is that the contestant has never before entertained the thought that Liverpool is north of Lille, or that Lille is north of Lagos. And yet his knowledge and belief preceded his pressing the appropriate buttons.

Knowledge and belief do not show up in consciousness. There is nothing it is like to believe that Lille is north of Lagos. The contestant had the knowledge/belief before the question arose, but not as an occurrent thought.

Moreover, when the contestant is asleep or when he is concentrating on a game of chess, or when he is terrified of an impending crash, he still knows/believes that London is north of Lagos.

To capture this we might say that someone with the appropriate belief or knowledge stock, is disposed to put the cities in the correct order when so required.

Someone with the required knowledge stock is able to control a ball and deflect it into the path of a team mate without needing to think about it first. Someone who bumps into someone on the Paris Metro will be able to say ‘Pardonnez moi, je suis désolé.’ Without having to translate the phrase beforehand. When we are the masters of certain dispositions we are able to act without pre-meditation.

When I wrote above, ‘without needing to think about it first,’ and ‘without pre-medittation,’ I did so because in these cases the action is thoughtful without any requirement that a conscious thought must attend the action. That is why we think of these actions as ‘second nature’.

The fine artist, of whatever stripe, so inhabits her medium as to be able to act within its constraints without having to bring in front of consciousness her activity. That second nature is only available to someone who has internalized the medium within which she works. ‘We do it without thinking,’ as the phrase goes. Perhaps it would be better to establish dispositional attitudes as, ‘We do it;’ and this doing it we are thinking; so that ‘thinking’ isn’t some kind of shadowy attendant activity. The activity itself is a form of thinking.

It is an advantage of such a view that it explains why we put a premium upon the artist’s intention, rather than the work being merely formally accepted as a pattern.

It is only when the artist in habits second nature that she is able to act in ways that are non-formulaic. When Ingres professed to Degas that great artists copy the masters; and then copy them again, that we see that the artist has to learn the formulae before she can put them aside and act in freedom. That freedom comes from the constraints of a discipline being inhabited and then used against themselves.

In Search of the Medium

In Poetic Artifice, Veronica Forrest Thompson worries away at what it is, the artifice, that makes a poem a poem – what stands it apart from ordinary language. And in teasing out the nature of her medium she draws ethical conclusions as to what is an what is not good poetry.

Kinglsy Amis has much the same in mind when he worries about a fellow poet who has written about a swan. Here he is writing to fellow poet Philip Larkin,

Have you seen (my dear little man) Europa and the Bull? By W. R. Rodgers? You have? Well, ASS IT GEORGE GETCHER KNEE UP IS CRUTCH SMASH IS BOLLOCKS GOUGE IS FU Believe me, this book is a rarity. I mean, you don’t often, however much our sort may pretend so, pick up a book that’s four-star, alpha-plus, specially selected, cordon-bleau shite ALL THE WAY THROUGH, do you? I mean it doesn’t let up for a single line, does it? It just goes on being vertiginous piss continuously, from line 1

Naked+ they came⊕, a nigglingϖ core♣  of girls

+ I’m reviving the fierce sensuality of all good poetry

ϖ N-aked plus giggling: I play with sound-patterns to enrich the texture of my verse

all the way through. And shall I tell you something? I don’t care about Europa, nor about the bull, do you? I think he’s short of subjects, don’t you? I don’t like this watch-while-I-translate-this-into-poetry stuff, do you? Do take this seriously: apart from all the individual things that make me wince, have you ever read a man who was more hysterically, more deliriously, more hilariously mistaken about what poetry is? Even Valentin Iremonger knows dimly what he ought to be doing. Rodgers is like a man who wears a piss-pot on his head because it’s shaped like a hat. Mind you say something  about this idiot in your next letter. OWOWOW I CANT WRITE IM NO GOOD I DONT CARE OWOWO And he includes that unerring label of the no-good, the poeticiser, the man with no subject: a poem about a swan. A FUCKING SWAN.

Those who search for the essence of their art run the risk of antagonising those who seek to reject essentialism. However, there are essential features which make a game of football, football. Surely saying this does not mean that football fans are elitist.

Here is an oddly dated snippet of a conversation on painting. It requires philosophy to secure the intuitions that Bacon and Burroughs air in this piece. (Click on image to play.)

The point, at last, is that the freedom we seek from the fine arts is hard won; and is achieved only by learning to live within the constraints of a discipline. In the fine arts that discipline is laid down in the history of the medium under scrutiny. 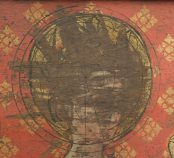