One Woman and Her Dog: Rex

The original title had in fact been eponymous with the film’s central character, but has been changed for the UK market in favour of Leavey’s four-legged partner. Well, we are a nation of dog lovers, and Rex will certainly pull on the heartstrings of anybody who has had a canine friend. In accordance, despite a war setting, Cowperthwaite takes an apolitical approach—refreshing, as Hollywood’s ‘America is the greatest’ schtick grew tiresome long ago— focusing on character study and the impact Rex had on Leavey.

A voiceover intro gives a brief background. Rebellious Megan has lost her best friend to drugs, and, as a heavy drinker, can’t, and probably doesn’t even want to hold down a dead-end job. Feeling hopeless, she joins the Marines off the cuff. Her unsupportive family miss her graduation, and Megan continues to push against boundaries, eventually being disciplined for drunken misbehaviour, for which she is set to work cleaning the K9 unit. Here, she meets Rex, a German Shepherd that is supposedly the most aggressive the unit has ever had. He scares her, but she’s intrigued, determined to make friends with him. For the first time, Megan feels a purpose to life, and she is eventually paired with Rex for deployment to Iraq. When the two are separated following injury, Megan is desperate to adopt Rex as her own, but finds a battle in her way, the dog deemed too dangerous for public life. 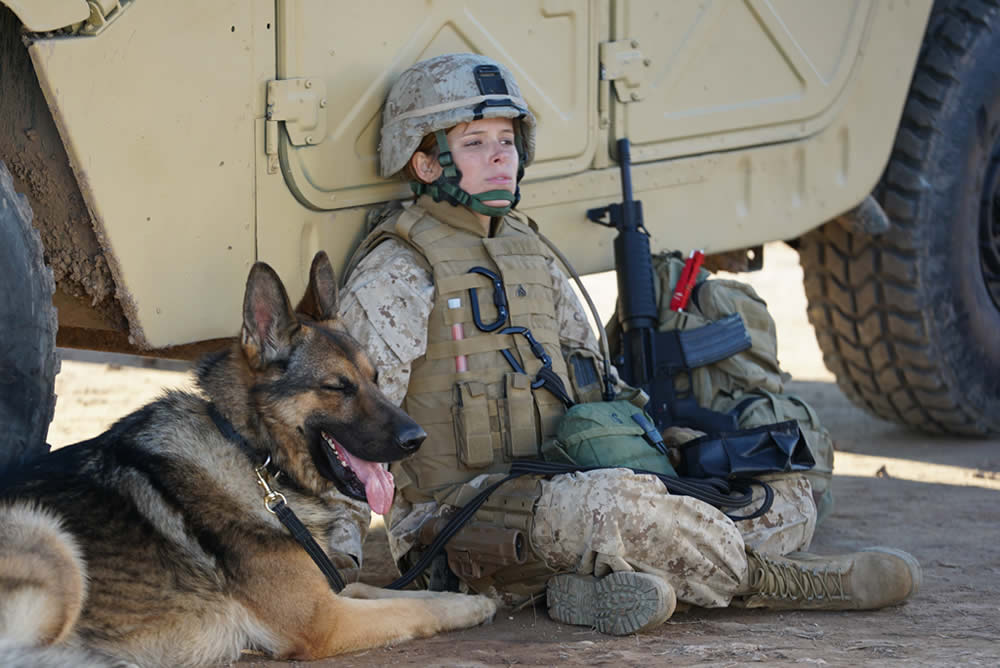 “They come back with all the same issues we do.”

While the film takes in suspenseful action scenes, Cowperthwaite does not waver from the relationship between woman and dog. As Megan and Rex traverse the landscape in search of IEDs—the dog is impressively trained; his searches feel realistic—the focal point is that the two are working together, as opposed to the bigger picture of fighting the Iraqis. The overall feel is a little simplistic for this, however a fine performance from Kate Mara uplifts proceedings, the actress believable as she conveys the disconnection that comes with base survival and, later, PTSD. The film very briefly touches on the impact of war on combat dogs as well as us as humans; a character tells a distraught Megan that “they come back with all the same issues we do”.

It’s food for thought. Rex is war lite, but as a film about trust, it hits the mark, staying just the right side of schmaltz. Recommended as a human—and canine—look at relationships in war.

Rex is available on DVD from 19 March

Previous Story:
Do We Understand Modernism? We Better!

Next Story:
The Science of Sleep