That one substance which is at once both everywhere and yet nowhere to be seen is the subject of Canadian photographer Edward Burtynsky’s most recent exhibition, entitled Oil. Through over 50 crisp, large format photographs, Burtynsky explores our involvement with this relatively ubiquitous substance, from extraction to motor-culture to environmental impact.

It’s the photographs of the unseen aspects of our relationship with this substance, however, which are the most intriguing. Most of those who see the images in this exhibition likely have a basic awareness before going to the show of the general scope of the extraction and refinement of crude oil, as well as the increasingly publicized adverse environmental impacts, but an abstract awareness is very different from seeing the actual landscapes effected by this massive industry. Seeing stretches of desert dotted with oil wells, thick pipes cutting through the country side, and large bodies of water glowing in parts with that gasoline rainbow sheen, makes real what was once only hearsay or anecdote. This is where the exhibition begins; the places where the crude oil is pulled from the ground.

Those same cars that ran on the black, thick liquid drawn from the ground in the images before that.

Canada’s Alberta Oil Sands are the subject of a number of Burtynsky’s photographs, and provide an interesting case study. Though previously thought to be too difficult to extract oil from, the Alberta Oil Sands have become one of the largest sites of recent extraction, making them the second largest oil reserve in the world, next only to Saudi Arabia.1 This development does include certain adverse side-effects, however, many of which can be seen in the exhibition. Alberta, which is predominantly heavily forested, has been shaved to the bone in many places, as deforestation is a necessary component of the type of extraction implemented at the Oil Sands.2 The water fairs no better, as diversion of water-flow, dewatering, ground water contamination and general pollution leakage are also common with the present mining methods.3 Though the landscapes created by this seem quite marred as a cause of these consequences, there is a bitter-sweat beauty in Burtynsky’s photographs. Much like those little rainbow coloured puddles at the gas station, one can’t help but marvel at how visually interesting these scenes are, regardless of their obvious implications.

Continuing through the exhibition, the viewer then travels to a familiar yet somewhat blighted territory. Across highways and roads, but recontextualized. Photographed from an aerial perspective, these long, thin lines of pale grey, which wind through the city, tying one end to another, take on a whole different meaning. Seen in relation to the sites of oil extraction, the present scale of oil use and subsequent carbon emissions can be considered more fully.

This development does include certain adverse side-effects

Taken further, one may even begin to look past these highways and see the grids of houses and block buildings, and notice the intimate relation that these also have with oil. It is oil that has allowed for the scale and speed of modern infrastructure development. Even going into these homes and offices, furnished and filled with synthetic and plastic materials. Materials which are made up of, built and assembled using, then shipped by, oil. Mixed feelings of fascination and apprehension are only natural at this point in the exhibition. Fascination at the rate of invention and development that the use of oil has afforded modern society, and apprehension towards the widely known effects of this accelerated and pervasive production.

These effects are the next and final chapter of this exhibition. Burtynsky travels to the places where helicoptors go when they can no longer fly, oil tankers when they no longer float, and cars when they no longer run. Those same cars that once traveled those stretches of highways in the previous images. Those same cars that ran on the black, thick liquid drawn from the ground in the images before that. Those same cars, now gutted, piled, and lined in rows as far as the eye can see. The tires of which form piles in other photographs in the exhibition, where each tire looks like a grain of sand on a black rubber beach. Though relating tires to sand may sound like an exaggeration, when there are over 45 million tires in that pile, it’s not such a stretch.

The scope and significance of modern societies involvement with oil becomes apparent with an exhibition like this, especially when concepts such as ‘peak oil’ are becoming more widely discussed. Peak oil, a much debated and feared topic, is the time when no greater rate of oil extraction can be supported by existing oil reserves, meaning that the global rate of extraction will begin to decline. The date that this will occur ranges from the near future, estimates by the BBC and other scientists placing it at 20154 5, to the near past, where the International Energy Agency states that it already occurred in 2006.6 This means that the developed nations need to begin decreasing their dependence on oil either in the very near future, or, what’s harder to swallow, immediately.

The importance of artists like Edward Burtynsky is never more apparent then now. His work provides more than facts and numbers, it provides a sobering look at the reality of that which fuels our modern lifestyle. Rather than throw blame around like old tires, Burtynsky investigates the situation with a cultivated distance. The viewer, the driver, the inquiring mind, they are who is left to continue the discussion and act on the findings. 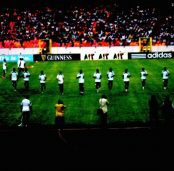 Next Story:
Fliers for Nigeria