Can we have another renaissance? why not, Neo-Modernism only needs its own Michelangelo to fuel a return to modernisms core values.

[dropcap style=”font-size:100px;color:#992211;”]H[/dropcap]aving looked at the characteristics of postmodernism and at some of the alternatives struggling to be heard in the throng, we finally come to what may be the most robust challenge to the postmodern era, Neo-modernism.

The ‘Neo-modern’ position is associated with the work of Ágnes Heller, Victor Grauer and Carlos Escudé, it is the most similar to modernism; emphasizing the need for universal values and taking account of the criticisms that postmodernism levelled at its predecessor. A key figure in understanding the criticism of postmodernism is Habermas who has stressed the relativism of postmodern thinkers cannot be made to work alongside human rights.

A good example might be the equality of woman around the world, this requires a notion of a universal subject IE all woman should be treated equally despite the cultural, religious or historic values of their various countries; postmodernists are reluctant to assert this since it devalues certain traditions. For postmodernists this devaluing can’t be justified due to relativism, our idea of the emancipated female subject with her Suffragette sash is to a relativist thinker, a Eurocentric construct, forcing this on other cultures would be a kind of moral colonialism. We can see that this leads to problems to in the area of working rights (class and hierarchy may be key to certain tradition) or in Gay rights and so on. Habermas is clear that postmodern relativism and notions of equality are, mutually contradictory consider Aylesworth’s description below,

Habermas argues that postmodernism contradicts itself through self-reference, and notes that postmodernists presuppose concepts they otherwise seek to undermine, e.g., freedom, subjectivity, or creativity. He sees in this a rhetorical application of strategies employed by the artistic avant-garde of the nineteenth and twentieth centuries, an avant-garde that is possible only because modernity separates artistic values from science and politics in the first place. On his view, postmodernism is an illicit aestheticization of knowledge and public discourse. Against this, Habermas seeks to rehabilitate modern reason as a system of procedural rules for achieving consensus and agreement among communicating subjects. Insofar as postmodernism introduces aesthetic playfulness and subversion into science and politics, he resists it in the name of a modernity moving toward completion rather than self-transformation. (Aylesworth, 2015)

While in his chapter ‘Modernity versus Postmodernity’ (1981) in the book,  A Post Modern Reader (1993) Habermas had already outlined many of his objections to modernity the critique of both positions could be a way developing a third position. 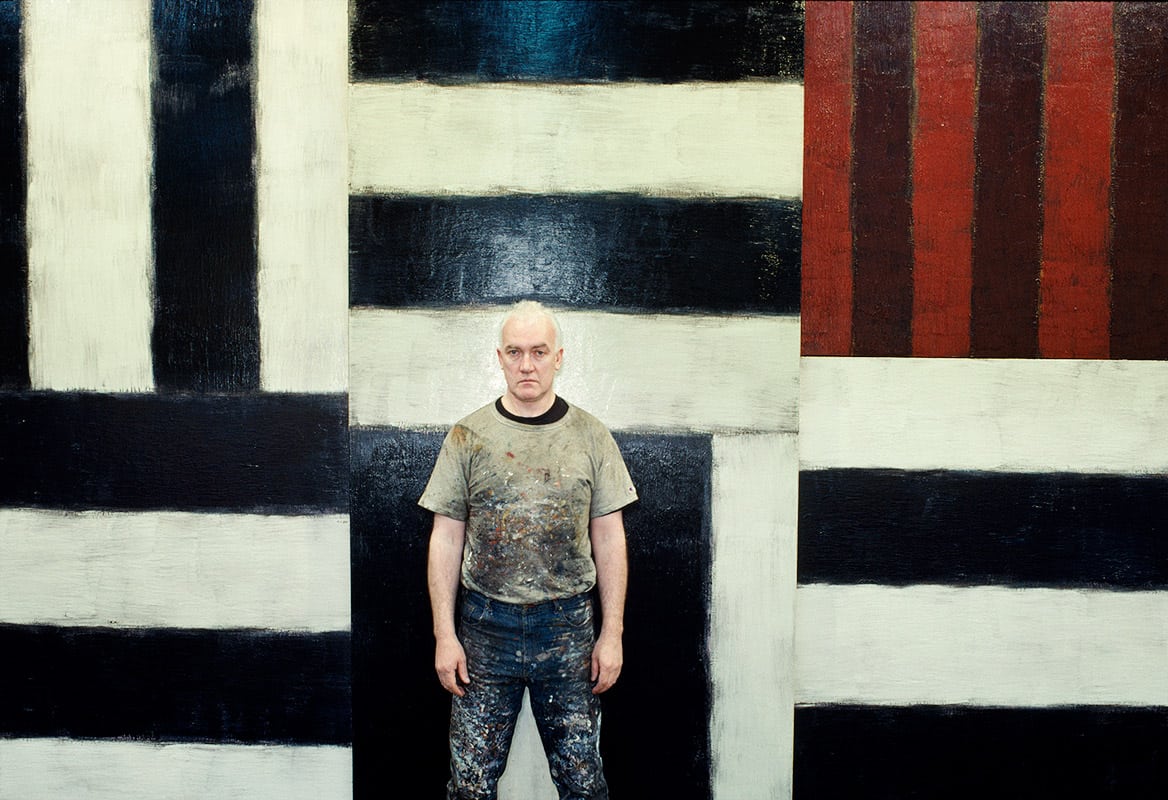 For others the dynamic is more or less a battle between the underlying values of the modern and postmodern era with the emphasis shifting sometimes slowly and sometimes dramatically from one to the other,
“Whatever happened to postmodernism?” asked the critic Hal Foster in 1993, reflecting on the apparent exhaustion of the postmodernist project in art and theory. Rather than declare the end of postmodernism, however, Foster went on to sketch a complex historical picture in which modernism and postmodernism are engaged in a kind of temporal dance, where one or the other comes to the fore at different moments,” (Christoph Cox 2003)

The feeling that there is no postmodern project or that there is a dead end in terms of following through the values of the epoch is common to both Foster and Habermas as well as those other theories and movements which challenge postmodernity (altar-modern, meta-modern) This directionless feeling means that serious global problems can’t be seen at the appropriate level and responses to crisis are inadequate,

“Postmodern humanity faces a major challenge. It must solve a dilemma it does not want to face. If all cultures are morally equivalent, then all human individuals are not endowed with the same human rights, because some cultures award some men more rights than are allotted to other men and women. If, on the other hand, all men and women are endowed with the same human rights, then all cultures are not morally equivalent, because cultures that acknowledge that ‘all men are created equal’ are to be regarded as ‘superior,’ or ‘more advanced’ in terms of their civil ethics than those that do not.” (Carlos Escudé, 2002) 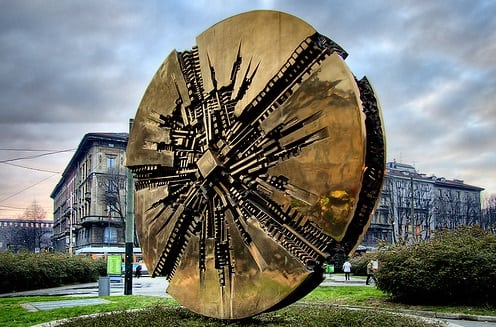 Escude is directly challenging the politically correct thinkers who want to avoid this issue; he appears to be calling for a reinvigorated faith in modernist values and a renewed confidence in the emancipated universal subject protected by international rights.

The Art Of Neo Modernism

Artists who obey the neo modernist ethos take serious subject matter, they are often interested in the classic aesthetic experience and emphasise rigour in their practices. Some identify directly with the term others are simply more modernist than postmodern and have had to adapt and develop strategies to avoid the acerbic criticism and or disinterest of postmodern audiences,

“In eschewing mass-media content, the genre proposes a more radical exploration of the formal conditions of the medium itself. Against the anesthetic assault of daily life, it reclaims a basic function of art: the affirmation and extension of pure sensation,” Christoph Cox 2003 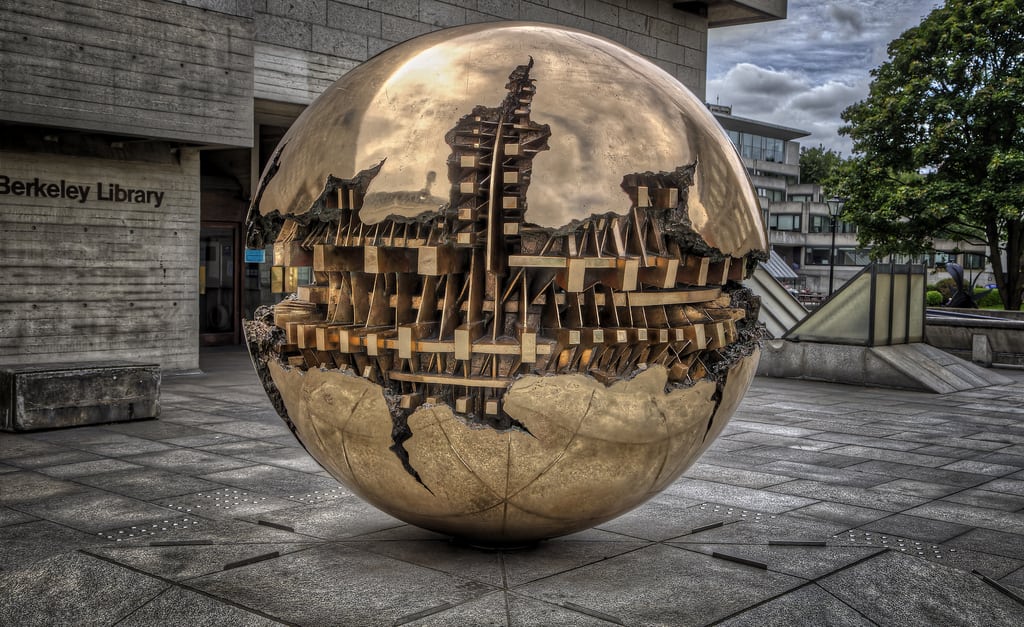 Arnaldo Pomodoro, Sphere within a Sphere at Berkley.

Cox’s sentiment is also echoed in the infamous art critic Robert Hughes who spoke of the, “soul-nourishing potency of art,” Hughes denigrated many postmodern champions including a fraught exchange with Jeff Koons, describing Andy Warhol as the ‘stupidest’ person he ever met and pouring scorn on the media savvy sensationalists of the UK Scene. Hughes did appreciate the work of painter Sean Scully among others who he saw as continuing the important role of art,

“What we need more of is slow art: art that holds time as a vase holds water: art that grows out of modes of perception and making whose skill and doggedness make you think and feel; art that isn’t merely sensational, that doesn’t get its message across in ten seconds, that isn’t falsely iconic, that hooks onto something deep-running in our natures. In a word, art that is the very opposite of mass media,” Robert Hughes

Other examples of this seriousness and slow art is in the work of Anselm Kiefer who has explored some of the darkest periods of western history, the need for art to create meaning and connections, and the role of science and knowledge in the development of civilisation. Some of Kiefer’s works take many years to complete and are subject to exposure to the elements for long periods of time.

Arnaldo Pomodoro the Italian sculptor born 1926, died at 91 in 2002, Pomodoro consistently made iconic works which addressed serious religious and metaphysical concepts worked on set designs for opera and has his works in a number of public and private intuitional spaces, his career completely ignored the post modern crisis and opted instead to follow his own obsessions.

There is also a group who identify loosely as ‘neo modernist’ this group was started by Guy Denning in 1997 and while there are a diverse set of practitioners there does seem to be a tendency to semi abstract figuration and an anti establishment bent that is expressed on the groups website. 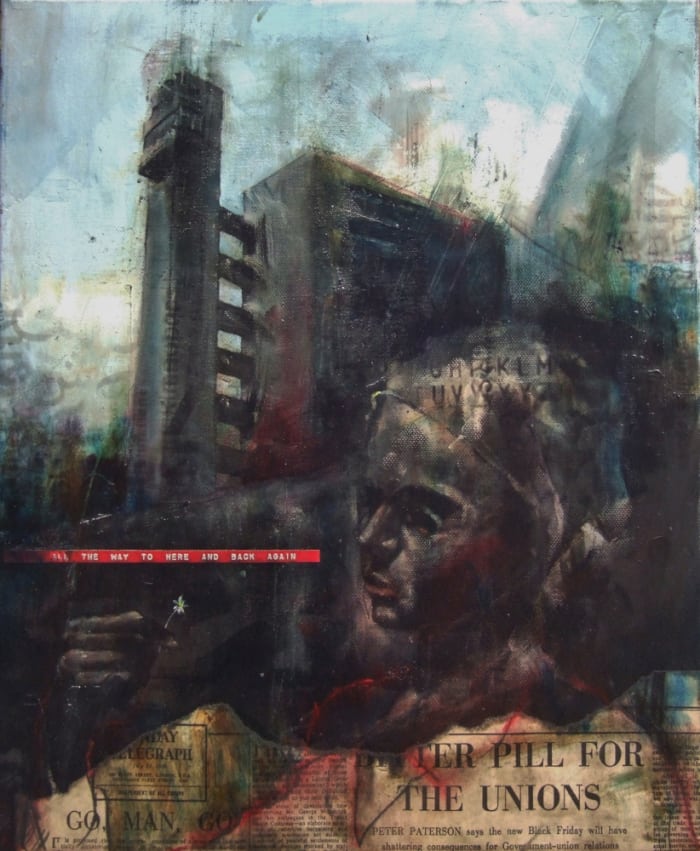 These values seem more robust than the ‘new sincerity’ of meta-modernism and more universal then the identity politicking of alter-modernism. However in the light of Denning’s statement below (excerpt of the manifesto see here) there may be cause for caution in the face of the optimism that Denning expresses drawing on Baudelaire,

‘We are at a point in time, culturally and socially, arguably similar to that of the late nineteenth century. New communication technologies open the world to us in a manner similar to the way industrialisation of the late 1800’s brought aspects of world culture to its then new audience. The modern ‘surfer’ can aimlessly travel the world via the internet taking in the new modernity as easily as could the ‘flaneur’ of Baudelaire’s day’ (Guy Denning, 1998)

Modernism’s values have also been alive and well in the slick design ethos of the modern multinational technology companies that have become more and more powerful. Bringing cool fetishistic objects into the homes of millions of people and cultivating a dependence (via iPhones) on the screen, 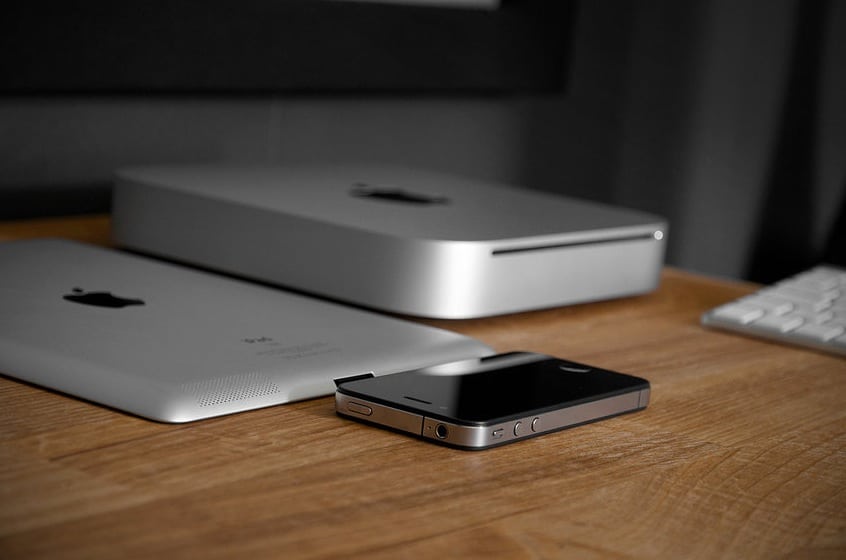 “The modernist aesthetics of Apple are well documented. Aaron Betsky argued in 2012 that “the company that has already done more to bring the notion of clean lines, abstraction, white, and every other surface attribute of Modernism to the masses than any architect or architectural theoretician.” (There’s modernism as style again, or even simply as brand—a list of formal features or “surface attributes” to be checked off a list, rather than a philosophical or political engagement with historical modernity.) Gordon Bruce has similarly discussed modernist aesthetics not only in Apple’s contemporary designs but in those of IBM in earlier decades, seeing in them echoes of Bauhaus design,” Natalia Cecire 2017 Modernist revivals in all areas must avoid validating the ‘extreme centre’ the managerial corporate class that dress their interiors in the Scandinavian style but share little in common with Hughes heroic ideas about ‘nourishing the soul’ they are technocrats who serve the status quo and the market, ‘People talk about the extreme left and the extreme right, but the real danger today is from the extreme centre,’ Tariq Ali’s concerns are shared by many of the theorists that are associated with neo modernism not least Agnes Heller (who appeared at the symposium ‘The Extreme Centre’ with Ali in 2017) so there may be hope that neo-modernism wont be mugged by the corporate world to sell goods, or at least not un-noticed,

“The ‘extreme centre’ as presented by Ali is a political system where two political parties with different clientele are basically carrying out the same policies. Hence, the political categories of ‘left’ and ‘right’ have been replaced by the ‘extreme centre’: a neoliberal consensus distinguished primarily through a compliant service to the market. Ali believes it has extended from the United States to European politics,” Denisa Tomkova, 2017

Neo-Modernism remains an opportunity for revival but it comes with its own drawbacks and we can only hope that if it does come to define a knew era it will be soul nourishing rather than profiteering that is the guiding force.

Previous Story:
A Taste of Dissent

Next Story:
Blaze at the Glasgow School of Art