Mutiny on the Bounty: Trials

Here is a band with a ceaseless work-rate, an impressive touring/gigging record and Facebook and Twitter pages filled with adoring fans 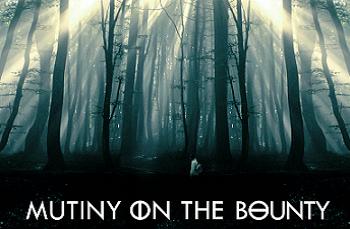 When confronted with Trials, the first thing that struck me as intriguing (before I’d even hit play) was the genre description Mutiny on the Bounty have given themselves.

‘Rock/Math/Indie’, despite being an interesting combination in terms of suggested stylistic convergence, was admittedly not one which stirred a great deal of excitement. Personally, I find most modern Indie bands to be – in the words of electronica/beat-box pioneer Beardyman – “the most ceaselessly uninventive, retrospective music in the f**king world”. As for the other elements, ‘rock’ is such a broad and slippery little term it is nigh impossible to get a grip on due to its near-boundless diversity; and ‘math’ is an intriguing one, being either a wonderful exhibition of timing and artistry at its best and a shallow pit of self-indulgence at its worst.

Due to this, it was with mixed feelings that I settled in to review Mutiny on the Bounty’s second full length effort (and first with their new lineup). Awaiting the download, I decided to research further into the band; the result being a heightened interest in what I was about to hear. Here is a band with a ceaseless work-rate, an impressive touring/gigging record (having supported the likes of Kings of Leon, Coheed and Cambria and Franz Ferdinand among others) and Facebook and Twitter pages filled with adoring fans chipping in to praise their most recent live efforts. As a promoter, booking agent/band manager and general slave to the live music scene, nothing is more of an eye-opener to me than an up-and-coming band with a vibrant, positive fan-base. These are the bands I look to book!

The first impression I get of Trials is one of carefully crafted atmosphere. ‘The Long Loud Silence’ brings an introduction of almost dystopian grit, which blends seamlessly into the crushing opening riff of ‘North Korea’ – an instrumental track. I would definitely say that the placement of this piece is a definite positive, as it nicely showcases the musicianship and influence base MotB are working with, without coming across as ‘show-off’. As it turns out in retrospect, the intricate guitar harmonies, wandering bass-lines and intelligent drumming set a high bar the rest of the album swings from with ease – although perhaps in the early to mid-section of the song, the riff may become a little too repetitive and perhaps a tad stale after a few minutes.

By the time ‘North Korea’ blends seamlessly into ‘Artifacts’, the high production values of the record have made themselves apparent  – working with producer Matt Bayles (Pearl Jam/Mastodon) has resulted in a vibrant, eclectic mix – and when vocals are introduced, this is only further confirmed as clean and shouty, aggressive styles fit alongside each other brilliantly. My only criticism is toward the small amount of falsetto used, which sounds a little forced. ‘Artifacts’ as a whole is another interesting piece, bringing interesting timing-work and an anthemic feel reminiscent of a driving indie song (although with a higher standard of musicianship).

The next few tracks continue to build on this, with ‘Modern Day Robbery’ showcasing some brilliant guitar-work and catchy lyrics. Towards the end of the song, I can almost see a live crowd mouthing ‘this is a modern day robbery’ and nodding their heads, such is its infectious nature. My only qualm here is that I’m not the biggest fan of some of the shouts towards the beginning of the song – they just seem a little off.

As a dabbler in bass myself, I was pleased to hear that this was followed by ‘Candies’; more of a bass-oriented track. A slower song, it features wandering bass and guitar lines with a sprinkling of floaty cleans (reminiscent, perhaps, of Funeral For A Friend’s Matt Davies-Kreye) which work beautifully to slow the tempo of the album but keep the ‘spark’ there. ‘Candies’ is definitely another example of a careful, thoughtful stylistic process, realising and catering for the band’s musical potential.

Already having mentioned the album’s eclecticism, ‘Trials’ is quite remarkable in its ability to change pace with natural ease – stuck in the thick of the album is instrumental ‘Shadow Figures’, which restores the weighty atmosphere of the opening of the album in a sci-fi-reminiscent grip, before launching us into ‘Myanmar’.

‘Myanmar’, another instrumental track, is a fast-paced piece with a lot of interesting guitar effects and technicality. Despite the very capable vocal ability, the progression and interesting musicianship makes this hardly noticeable. Towards the end of the track, a lot of more interesting drum-work becomes more prominent, before the vocals kick straight back in at the beginning of ‘Fiction’.

Although I’ve already ‘been there’, the vocals on ‘Fiction’ have very heavy rings of post-hardcore greats like Davies-Kreye or a higher-ranged Ian Watkins (Lostprophets). For me, this is one of the greater strengths of the album, as the complexity of the pieces combined with the grounding of a strong lead vocalist really makes some of my favourite tracks – even more so later on in the album, with some wonderfully placed harmonies in ‘For The Men Who Had Everything’. I think they fall down a little in ‘Statues’, some of the shouted vocals sounding forced and a little lacking (especially when compared with the more capable screams on ‘Shifting Paradigms’) but overall MOTB are demonstrably, and undeniable, a vocally gifted band.

a bit convoluted and tiresome after repeated listens

This said, the most appealing element of ‘Trials’ is in its very name – an album wrought with shameless experimentation rarely matched by up-and-coming bands in an age of frightened standardisation. Admittedly, it would have most likely have been an album to pass me by were I not given the opportunity to review it. I’m glad I didn’t miss it, as although some of the repeated guitar-work can get a bit convoluted and tiresome after repeated listens, they have created an intense, interesting effort. Here lies the groundwork to an exciting future for the Luxembourg rockers.

Mutiny On the Bounty’s Trials on Discogs

Next Story:
Stereotypes and Swiss Interns: An Academic in Africa