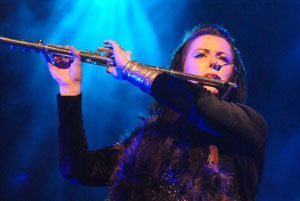 The event has become an annual pilgrimage for their dedicated fans. In the last couple of years it's been the centrepiece of a weekend of gigs featuring spin-off bands and side-projects such as Breathing Space and Halo Blind, to encourage more people to make a weekend of it. 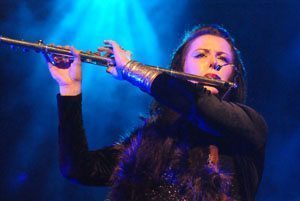 The show began with keyboard player Iain Jennings alone on stage, kicking off the programmed loop that began the instrumental "Distant Train", to be joined by Anne-Marie Helder and Bryan Josh playing call-and-response on flute and guitar. The rest of the seven-piece band joined the stage one by one until lead vocalist Olivia Sparnenn finally made her dramatic entrance for "Answer the Question".

the sound was crystal clear, every instrument and voice audible in the mix

The band went on to deliver two and a half hours of hugely atmospheric and emotionally-charged rock, mixing newer songs from their most recent album Go Well Diamond Heart with many highlights from their twelve-year career. Their big wall of sound can be a challenge even for the best sound engineer, but tonight the sound was crystal clear, every instrument and voice audible in the mix. And the band played with an energy and intensity that matched anything I've seen from them in recent years.

Eighteen months after promotion from backing singer to fronting the band, it's apparent how much Olivia Sparnenn has grown in to the role. She's able to take songs such as the hard rocker "Fading Colours" and make them hers, and songs like the soaring "Forever Young" and her big epic "Questioning Eyes"(a song she originally wrote with Iain Jennings for Breathing Space) grow more powerful with every performance. Stepping into the shoes of a much-loved lead singer is never easy, but by now she's won over most of the sceptics. The huge smile on her face throughout the gig said it all.

Other highlights included the Floydian "The Last Climb" featuring Anne-Marie Helder's extended flute solo, and a great version the title track from "The Last Bright Light": a song not played for a while, and hasn't always come off live as well as this time. Whilst Bryan Josh's strongly Gilmour-influenced guitar playing has always been one of the band's great features, his raw and impassioned vocals have improved greatly in recent years. One minor criticism is that Sparnenn, as the visual focus of the band, is absent from the stage too much of the time on songs where Josh is singing lead. 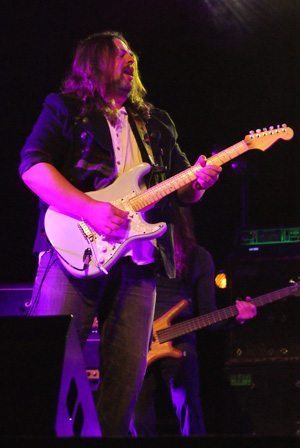 Although he avoids the spotlight and lurks at the back of the stage, Liam Davison adds a lot to the sound in his understated role as second guitarist. He's not a traditional rhythm guitarist at all; much of his playing is melodic runs and atmospheric fills. As well as his effects-laden extended solo introducing "Spirit of Autumn Past", which has been compared to Robert Fripp, there was some great volume control guitar work during "Ice".

They ended the main set with a tremendously moving "And When The War Is Over", one of the standouts from their last studio album. After one of the best versions of their regular encore "Heroes Never Die" I've heard for ages, they finished the night with a couple of covers. First was an Olivia Sparnenn vocal showcase in "Somewhere Over The Rainbow", accompanied just by keys, and finally their celtic-rock Christmas cover of Greg Lake's "I Believe In Father Christmas" which the band really ought to record.

In previous years, for whatever reason, the Grand Opera House shows haven't always reached the heights the band are capable of. But this year, perhaps responding to the challenge laid down by their former lead singer the previous night, they pulled out all the stops and played an absolute blinder.

Mostly Autumn play a series of special Christmas shows in December, three in England, and three in The Netherlands. Details at http://www.mostly-autumn.com