Guts and Gusto win out whilst Grammar Gets Gutted.

[dropcap style=”font-size:100px; color:#992211;”]T[/dropcap]he one downside to journalism (apart from the corruption, lies, total amorality, psychopathy, depravity, low wages, and the predominance of coke-head public school twats) is that it turns you into a grammar nazi.

I’m not joking. The moment you finish your training, be it on the job or at university, you will feel physical pain at the sight of poor grammar. Split infinitives? Hot lemon juice in the urethra. Confusing practise and practice? Shoot them. Shoot them all. Confusing were, where and we’re? BURN THE HERETIC. Rogue apostrophes? You may as well be buggering baby seals, you sick bastard.

Which brings us neatly to this week’s metal reviews, starting with Cardinals Folly 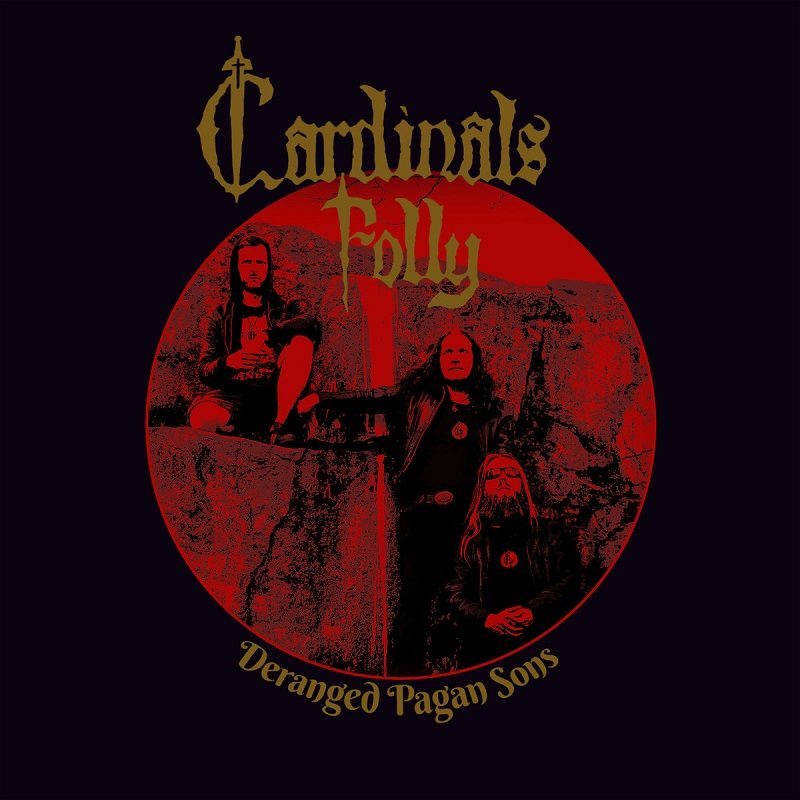 and its new album, Deranged Pagan Sons. Now, Cardinals Folly has two notable features. One, the moniker is an appalling example of grammar – where’s the apostrophe? Two, this trio of doomsters is from Finland, itself a doom metal powerhouse of sorts. Fittingly, then, they do have that faintly warbled, droning but still traditional quality of local legends, Reverend Bizarre. The vocals even sound rather similar, in terms of their wailing croon and occasional lapses into snarling.

On the other hand, they seem far fonder of the more urgent and direct songs in the RB catalogue, as opposed to the really long and drawn out ones. (Listen to the two halves of 2005’s Crush The Insects to get the point.)

Does this mean they are a glorified tribute band? I’m not so sure. To begin with, their up-tempo approach gives them a directness and vigour that’s all their own. By doom standards, this is a fast-paced and aggressive offering, the slowest track, “I Belong In The Woods” being a jarring reminder of how urgent the rest of the music sounds…. Before it too speeds up to their usual pace.

Likewise, all the tracks account for themselves very well. There are grooves, hooks and catchy choruses, but also an uncompromising quality in the melancholy and heaviness. They certainly have their influences, but also a sense and direction that is their own and which will become increasingly clear with future releases. (One hopes.) They even bring in some other influences. Album closer “Secret of the Runes” sounds a lot like what Bathory might have recorded if it had ever decided to turn into a Finnish doom band for an afternoon. Throughout, the record is consistent, satisfying and promising.

Their grammar is still shit, though.

Next up is yet more Finnish metal, this time with a folkish tinge and care of Ensiferum. Their latest accordion/keyboard orchestral offering, Two Paths, is in fact very well titled. On the one hand, it is cheery, accessible fun. On the other hand it is so cheesy, I have had to beat off swarms of mice from devouring my stereo’s speakers. Once I washed my hands, I then proceeded to make fondue with the rest. By definition, it’s hard to not sound a tad eccentric when your folk instruments, metal guitars and jaunty traditional influences all bound about the studio, while your lead singer shrieks like he’s got laryngitis. 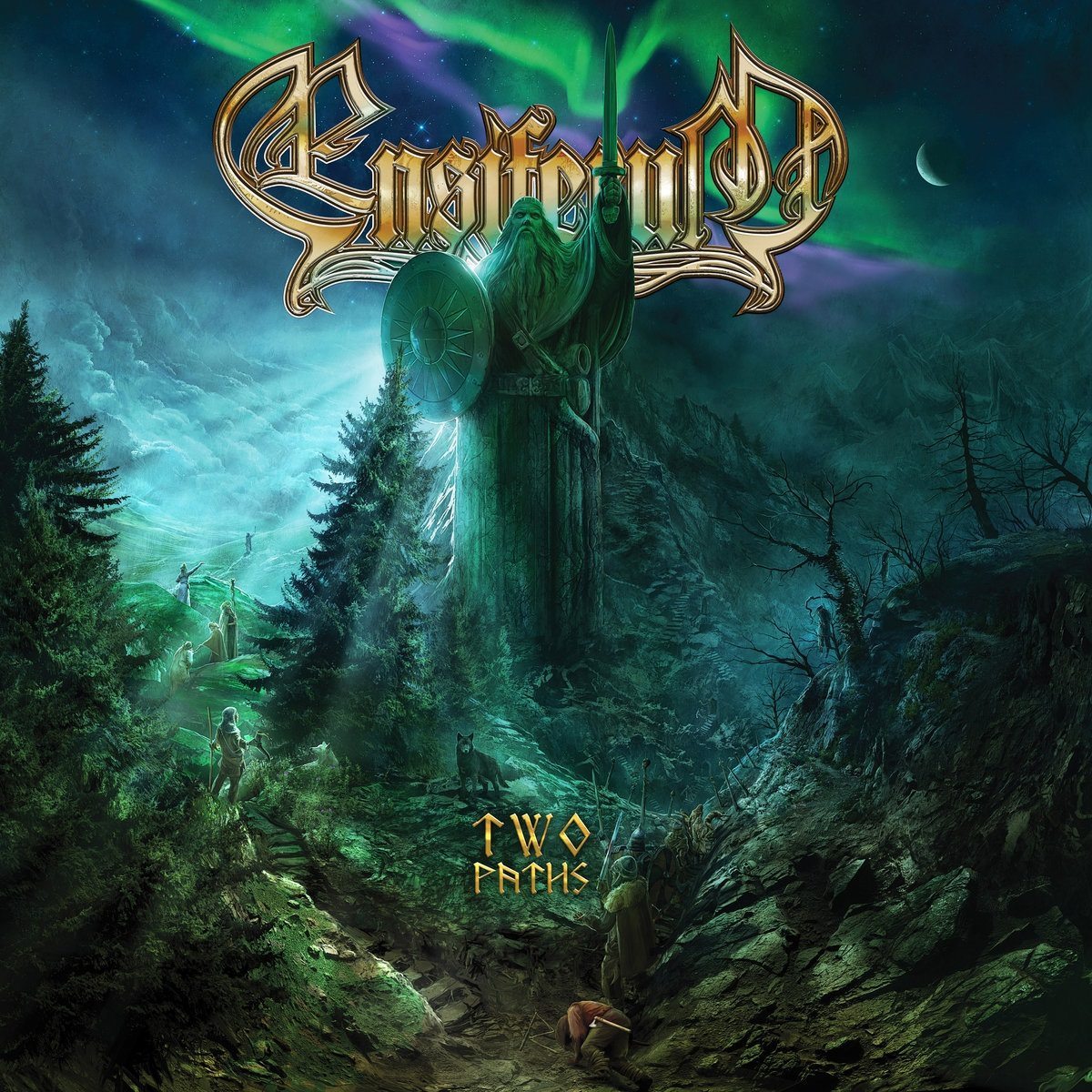 Some of the best folk acts – like Finntroll – positively embrace this with gleeful humour. Ensiferum, meanwhile, just seem to play it straight – which means, when you hear the accordions kick in, there isn’t the slightest hint of irony involved.

Of course, the truth is, this is a band that doesn’t give a damn. You can tell bands which try to be arch and achingly sarcastic, the ‘irony’ dripping down their checked shirts and over their Birkenstocks like the hipster wank-stains they are – the smugness seeps through and you feel you’re listening to a half-arsed Radio 4 comedy sketch stretched over an entire album. Ensiferum can’t even spell irony. They’ll perform songs about valkyries and ditties about how God is dead (as heard in the song, err, “God Is Dead”) without even the slightest twinge of sarcasm. William McGonagall, had he ever ventured into folk metal, would have surely recorded this album.

The truth is, Ensiferum doesn’t care how utterly naff it sounds, and this is both its liberation and its salvation. It’s jigging to a 80s heavy metal/sea shanty combo like no one else is watching, and this gives it an exuberance and a soul which makes it utterly fun to listen to. It won’t win any awards, but it leaves you with a spring in your step. What more could you ask for?

Monolord’s new album, Rust, that’s what. And thank goodness they’re not from Finland, because otherwise this would be getting embarrassing. (They are from Sweden, which is next door to Finland, and…. Oh well.) The album’s sound is a two-tier act throughout – heavy, crushing guitars versus ethereal, haunting vocals and minor sections. It is reassuringly heavy, of course, but it is also accomplished and well-structured, the songs each pulling together their disparate parts into a cohesive whole. Songs like the title track, “Wormland” and “At Nicae” all have a grand sweep about them in terms of the melancholy they evoke and their complex compositions, but are kept lithe and vital with the crushing doom riffs in the foreground. It’s a formula that works precisely because it stands up for the entirety of the album.

Good music takes you on a journey; Rust takes you to a vast junkyard of ambitions, dreams and hopes in the middle of a Jovian desert, and yet still manages to make you feel the beauty there. In that sense, of course, all doom metal is about the sublimity of gloom, the grandeur of misery. Or at least, that’s where Rust abandons us as it takes its leave.