[dropcap style=”font-size:100px; color:#992211;”]T[/dropcap]he two men meet in the sun-drenched garden of the Buttercup Café in Lewes.

Snips: As you know, Sharks is doing a Crowdfunder campaign to try and resurrect the Sharkmobile. If it works I wondered how you feel about getting back behind the wheel?

Spedding: I’m surprised you asked! I may not be the best driver but I think there was a patch of oil on the road as I negotiated that roundabout after the fateful Cleethorpes gig in 1972. Sure, I’ll drive if you want.

Snips: As an exclusive offer for the Crowdfunder campaign we have remastered the seven tracks produced by John Entwistle for the aborted third album in 1974 and titled them The Car Crash Tapes. They sound timeless to my ears and as good as anything we’ve ever done together. The track Poor Little Rich Girls seems to anticipate Nirvana by about 20 years. Why do you think Island Records refused to release them? 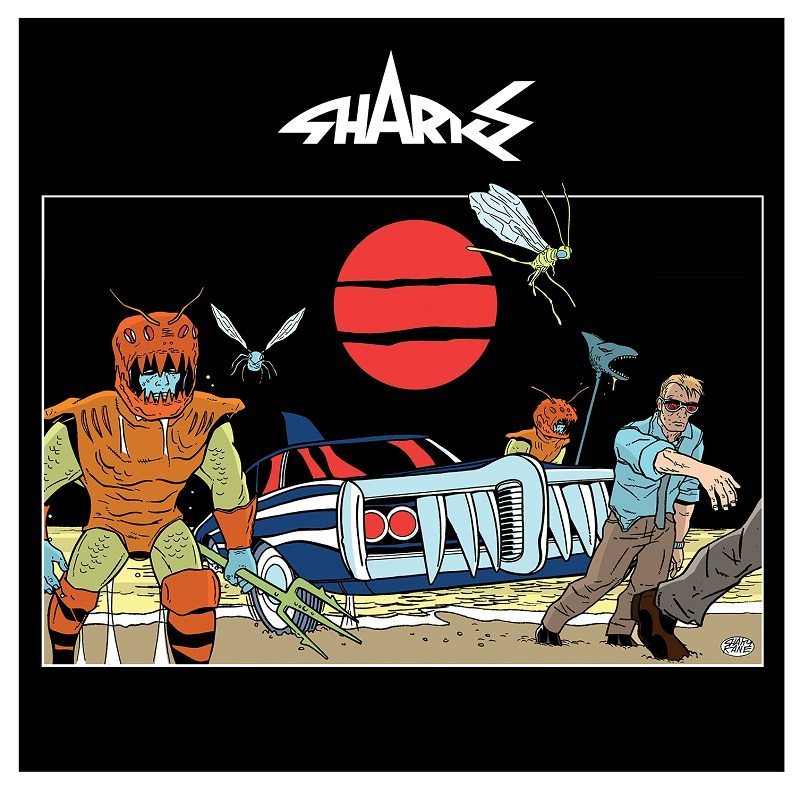 Spedding:  It had been a strange couple of years with three line-up changes and management difficulties. Perhaps we were considered unreliable by that point.

Snips: I have described the Sharks reunion as being both surprising and inevitable. What do you think about that?

Spedding: You always did have a way with words.

Snips: Once we got down to the serious business of creating contemporary music for a new line up you were very keen to maintain a strict focus on what you called the classic ‘Sharks sound’. Can you describe what that is?

Spedding: In 1972 we’d all come out of the tradition of English kids playing the American roots music we all loved and listened to. A tradition established by bands like the Kinks, Free, Who, Stones and Beatles – or at least that’s how they all started out. That’s our business model. I was wary of letting too many other influences creep in.

Snips: Speaking of the classic approach; young guitar players I meet always draw attention to the fact that on stage you produce a vast array of textures without the artificial aid of pedals. I know that you can use them because you mentioned that they are utilised in the War of The Worlds live show. Would you like to discuss the pros and cons of pedalization?

Spedding: When we did War of the Worlds in the studio in 1977, I didn’t use pedals. Later on pedals became necessary to recreate the sound from the record. There’s a skill to getting a good sound out of an electric guitar. If you use pedals all the time you can lose that skill.

Snips: Nowadays your weapon of choice is a metal guitar. What’s all that about?

Spedding: It’s a James Trussart Rusty Steel DeVille. I’ve been using it as my main guitar for almost 20 years now. It was rusty when I got it brand new. James makes ‘em like that. Some have snakeskin or alligator skin patterns in the rust. He uses some process involving real skins and an acid bath to render the design onto the metal. But apart from the metal body thing, they’re real good guitars. It’s just the body that’s metal. Mine is based on a Les Paul configuration except it has 24 frets. I find it very reliable in that it stays in tune and does everything that I need a good modern electric guitar to do.

Snips: I realise that compliments are cheap but I am always pleased when people tell me that I am a terrific singer/performer/songwriter etc. You bear the burden of always being described as a guitar legend. Do you feel the pressure to be consistently legendary?

Snips: I remember telling you about a long and incredibly boring dream I had where Frank Sinatra harangued me for hours about his career problems and the adversity he had faced in his progress to the top. You opined that it was a simple metaphor for the failures of my own performing career. As you know, I have only ever been successful as a professional music composer for film and TV. As the producer of my last solo album La Rocca (now available from Angel Air Records), do you think I should have stuck at it through the eighties or was I wise to move into another area?

Spedding: I have no idea why you wouldn’t be a successful performer. As you know, I personally prefer the studio to live. I’m glad you got the success as a composer.

Snips: Recording the upcoming album with our nerw red hot rhythm section was relatively smooth sailing, unlike the stormy and argumentative waters of the old Island Records days. Do you think that is because there were no hard drugs involved?

Spedding: Oh? I thought you were all on drugs except me! Seriously, I don’t think drugs made any difference to the recording process. In fact, I’d like all my money back.

Snips: That would be a sizeable amount. I disagree about the drugs and believe that cocaine particularly is a pernicious substance that has a negative impact on creative unity. Strangely enough the only protracted argument this time was about the album title. Would you like to explain why you wanted to call it THE COMPLETE HISTORY OF SOUL MUSIC?

Spedding: I can’t even remember what we decided to call the album now. (KILLERS OF THE DEEP) We didn’t use the long title, if you remember, because it didn’t fit the current convention for digital titling when only the first 10 or 12 letters appear. (THE COMPLETE HIS..) The title was just too long for that to make sense. We all liked the cheekiness of calling our album THE COMPLETE HISTORY OF SOUL MUSIC and it did make some kind of sense. Also, it’s the title of one of your songs and my own albums have nearly always borrowed a title from the running order as the album title.

The vegan food arrives, served by a Sussex maiden, and the two elderly gentlemen begin their repast with twinkling eyes.

Sharks will bring their new album and live shows to the public in September. If you would like to help them get their beloved Sharkmobile back a number of exclusive offers are available on their Crowdfunder site.

Next Story:
How We Hear (and it’s Not All in the Ear)