Gold-Bears – Are You Falling in Love? 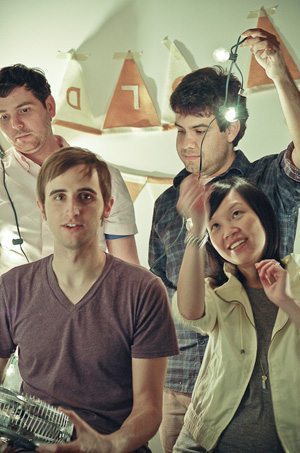 What's that sound in my ears? The Gold-Bear's debut album is messing with my head. And my hands are dancing too!

The Gold-Bears have been developing their sound for a number of years. Formed back in 2010 when Jeremy Underwood recruited a handful of friends to play songs he’d stockpiled since the demise of his former band, Plastic Mastery; the band quickly released a 7 inch, and since then have been refining their punk-pop sound.

You saved my life from a crowded record store

Are You Falling In Love? is the product of their many experiments. It's a collection of  frenzied crash pop, strummy ballads and pop dirges, weighing in at a tidy 33 minutes. Perfect for listing on the way to work, while cycling to a friend's house or getting ready for a night on the town. It gets your feet moving, your hips swaying. A real mood lifter. Record Store kicks the album off with great promise. A solid drum lead-in, sharp guitars and an ill-at-ease indie vocal sings, “You saved my life from a crowded record store”. It's a great number, one that would go down brilliantly at any summer music festival. All Those Years runs on with the same relentless energy. If I wasn't sat behind my PC writing this, I'd be up and dancing.

A few fast-paced minutes later, So Natural kicks in, and my ears begin to hurt. Less poppy and danceable than the previous tracks (I'm by no means a pop-Nazi), but in place a guitar screeches relentlessly, relieved only by the child-like sound of a xylophone. Echoes of The Velvet Underground and Nico come to me. They're experimenting. I get it. I'm just not sure.

Seguing straight into the title track Are You Falling In Love?, the distortion builds and I'm struggling. There's a deeply emotional lyric here, one I'm desperately trying to make out, but can't. I feel like stuck on the hard shoulder of the M1 and listening through an old Walkman. I'm straining. I can hear something good, but it just isn't coming through. And now I'm getting a headache. This definitely doesn't work. Can I hear it again, without the traffic track please?

If I wasn't sat behind my PC writing this, I'd be up and dancing.

With East Street Attendant we're back on familiar indiesque ground, and just as I'm shaking off the headache, guitars screech again. Are you really trying to hurt my ears? I stick with it though; and the next few tracks deliver a string of punchy numbers with great drum and guitar sequences, uplifting backing vocals (I just love vocal harmonies) and amusing lyrics.

Sometimes the pace is so fast I'm caught off guard. I don't know where I'm going. A lyric catches my attention, a guitar screech, a bass line, before a thrashing drum beat.

If I was at all undecided, Besides You definitely won the day. A lament for home. The vocal cries, “Is there nothing left in this town to make it worth it?”The strings lend a delicate touch without getting gushy. My ears have recovered. I'm off the M1 and dancing, grass underfoot in a festival field.

The final few tracks keep up the steady pace with the closing track, Yeah, Tonight being the real winner. A soft acoustic guitar, drum beat like a giant's footstep and “Tonight, we can fall in love, love again like we did the first time.” And for the first time the distorted guitars are really working. They interject rather than dominate and drown out. They play as part of the soundscape, working with the vocal as it recedes, fades and returns, clear and strong to close the album with the call, “And tonight we can fall in love, in love again. And the drums come in!”

If my fingers could dance, they'd be all over my keyboard now. A great close to a great debut album. I can see all those bodies dancing in the summer sun now.