Nowhere is an arts-based event inspired by the infamous Burning Man, but is Nowhere a quaint “Euro-taster” or an event in itself?

For the last eight years the Spanish desert has been lit up by a small group of Europeans dedicated to keeping the spirit of Burning Man alive. For those of you who haven’t heard of Burning Man, it’s what Cartman aptly described as:

The biggest hippy festival in the world. 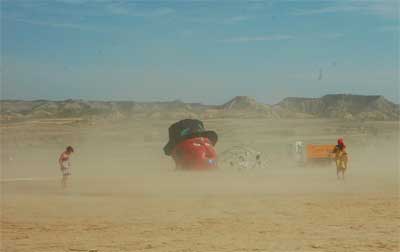 Driven by ten principals (not too dissimilar to the ten commandments) from self-reliance to leave-no-trace, Burning Man is a place where artists, free-thinkers, rebels, anyone with any interest in anything off the beaten track will travel. It has become as necessary as the pilgrimage to Mecca for many an “alternative” soul.

Like the avant-garde however, any counter-culture movement that gets too popular will inevitably fall into the mainstream it once set itself apart from. Over the years Burning Man has grown from a beach gathering in San Francisco to the arts-anything-goes event with over 50,000 participants. 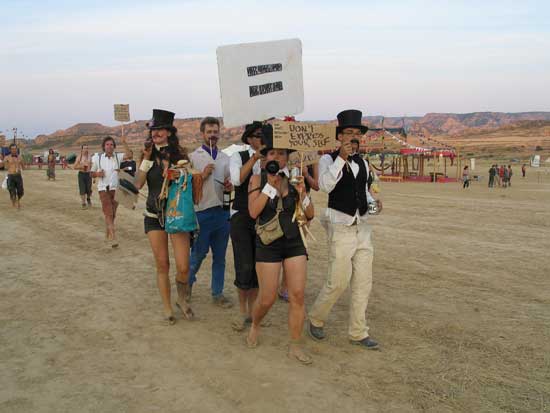 It is a place where people meet life-long friends and lovers, where nothing is bought or sold, where food and water is “gifted” and where you are free to get lost and find yourself.

Leap a few thousand miles over the Atlantic to the Spanish desert, Nowhere stands as a village to the mega-city that is Burning Man. With numbers approaching 600, it is a festival very much in its infancy, and as with all toddlers, is still finding its feet. So given the massive difference in size, why go to what could be considered a franchise or taster for the “real thing”? 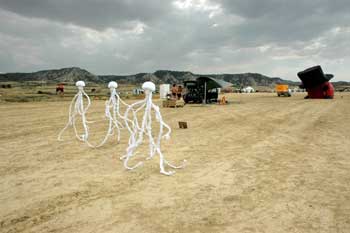 Having experienced both Nowhere and Burning Man for the first time in 2009 I was amazed by the vastness of BM. Set out in the Nevada desert, it truly was unlike anything I’d ever seen. “Art Cars” drove down its ramshackle streets lined with make-shift bars, theatres and tents. Men, women – even robots strolled, and strutted, through the dusty landscape. Without resorting to hyperbole, I honestly felt I’d stepped into the centre of Mos Eisley. And if you don’t know what Mos Eisley is, then go and watch Star Wars. BM truly felt like another world.

Nowhere in comparison was less abrasive on the senses. It was more relaxed and intimate too, being around just 1% of BM’s population. The event was mixed between old-timers, or core crew, who were hard at work keeping this intimate event alive; and first-timers, breezing in, amazed that this actually existed and happy to soak it all up.

On this first encounter with Nowhere, I often got the feeling from listening to others that this was a taster for the “real thing”. Everyone I spoke to would ask if I’d been to BM, and if I hadn’t, if I was going now that I’d sampled Nowhere. I had no intention of going, but was so moved by the Nowhere family that I went. 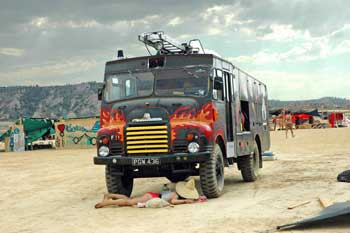 Make no mistake, Burning Man blew me away. Yet I also felt very lost, very anonymous. I was finally at the “real thing”, yet the real thing felt harder and almost too much to process. I had an experience I will never forget, though more and more I wondered if BM had possibly lost what had inspired those who went along when it was still a beach gathering.

Anything this big, this mainstream, could not represent the shared ideals of a community on the edges of conventional society, could it? The counter-culture is rarely 50,000 strong, but then again, thousands attend marches worldwide, united by a common goal. So what was I missing?

Make no mistake, Burning Man blew me away. Yet I also felt very lost, very anonymous.

I began to feel that the intimacy that had so won me over at Nowhere was missing in the Nevada desert. BM has scope, it is awe inspiring, but what I so loved in Spain wasn’t there.

Increasingly, I began to think that Nowhere resembled what Burning Man might have felt like when it started: an intimate gathering of like-minds. But Nowhere offers more than that. It isn’t simply BM circa 1986, or a taster for the supposed “real thing”. It is European. And this is very different. 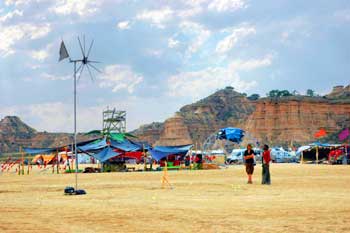 While the common language of Nowhere is English, the mentality is decidedly pan-European, and this is where Nowhere stands out. While inspired by the festival born on the beach, and driven by the same guiding principles, Nowhere seeks to bridge the divide. It is a genuine melting pot of nationalities compared to the predominantly American Burning Man. French, German, Italian, Norwegian, Russian, Spanish, I won't go on, but all are present at Nowhere, and all contribute their unique flavour to the mix.

For me, Nowhere is the real thing. It is not Euro-burn. It is not a franchise. It is its own thing, inspired, but independent from its older and bigger US relation. It is a gathering of Europeans, though by no means exclusively, who wish to party, to heal and grow in the blistering Spanish sun.

For me, Nowhere is the real thing. It is not Euro-burn. It is not a franchise

Far from going nowhere, Nowhere is finding its identity. While it may never free itself from the Burning Man connections, or want to, it is its own thing. It is an experience that cannot easily be found anywhere else.

Having experienced both Burning Man and Nowhere, I feel Nowhere is home. It is my relation and an event I recommend to all. I will certainly be back.

About Andrew Maitland Southern 14 Articles
"There are too many Andrew Southerns in the world. I've checked. There's a whole bunch of us. It's kind of annoying. In an over-populated world it's humbling to realise there are multiple versions of you. Maitland, on the other hand, is a name you don't see. Like any writer, I need to make my mark. So I can sink into the Andrew Southern soup or go the Maitland way. It's a name my ego loves and humility shies away from. I can't sink into the soup. It's not my style. So grandiosity it is. You can call me Andrew, though. Not Andy. There are too many of those too.