Marking Out the Territory

Rebecca Hossack gallery will reopen with an exhibition of prints by leading practitioners from both the western and indigenous traditions of Australian art. 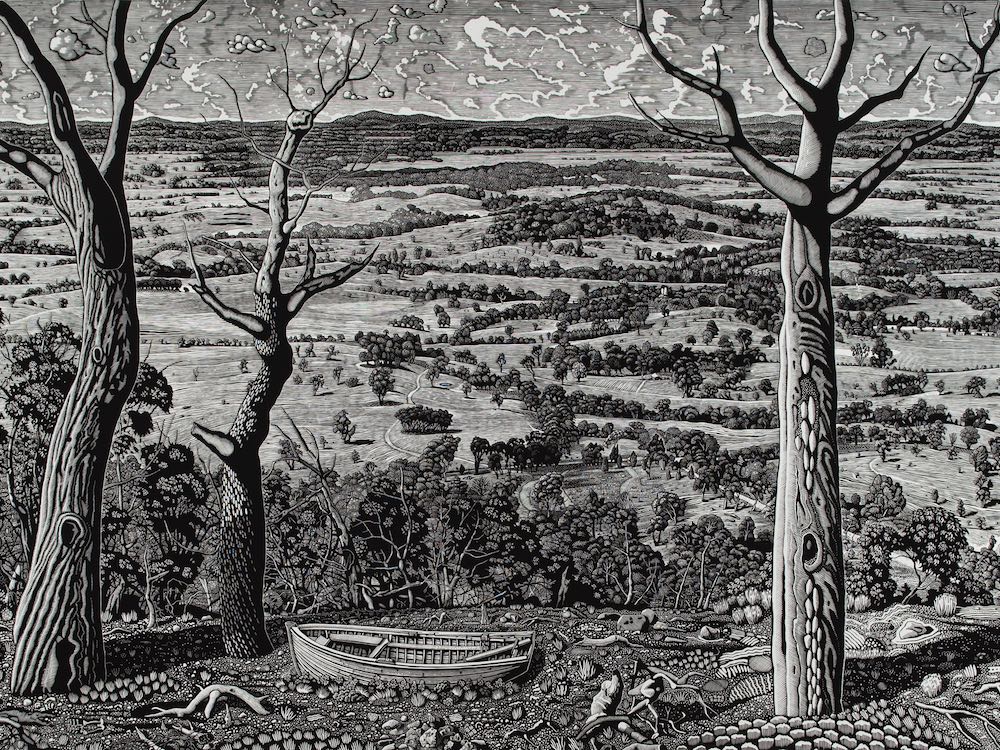 [dropcap style=”font-size:100px;color:#992211;”]R[/dropcap]ebecca Hossack art gallery will reopen with Marking Out the Territory, an exhibition of prints by leading practitioners from both the western and indigenous traditions of Australian art.

Across a broad range of techniques and styles, the chosen artists all share a common engagement with the land as a site of significant meaning. Through their image-making they investigate the relationship between nature and man, shedding light on this tension in arresting and unexpected ways.

Canberra-based GW Bot has developed her own pictorial language of signs and glyphs to capture and communicate the essence of the ever-shifting Australian environment, with all its extremes of fire and flood, drought and florescence.

In his bravura large-scale woodcuts and linocuts of rural Victoria, David Frazer explores a sense of place, and the emotions of longing, nostalgia and isolation that accompany it, leavened always by the artist’s delicately surreal sense of the absurd.

Hertha Kluge-Pott, now in her eighties, has won numerous accolades for her contribution to the field of printmaking. In her practice she focuses on the turbulent boundaries that exist between the land and its inhabitants, disavowing conventional pictorial structures and compositions to depict her subject ‘upside down and inside out’.

Tiwi Islander Janice Murray is celebrated for her formalised but characterful etchings of birds, the great agents of communication and change in the creation myths of her ‘country’.

Banduk Marika is a leading Yolngu artist from Yirrkala in the Northern Territory, who has been honoured for her contribution to aboriginal culture. In 2019 she was also featured in ABC TV’s This Place, a series celebrating ‘some of Australia’s greatest indigenous artists’.

Dennis Nona is a Torres Strait Islander artist, whose richly worked large-scale linocut work, depicting important creation myths, redeploys the traditional iconography of his people, and infuses it with new energy and power.

All six artists have works in Australia’s state and national galleries, as well as in important public, corporate and private collections in North America, Europe and the UK.