Dead men tell no tales, but the Dread Crew of Oddwood take no prisoners with Lawful Evil

[dropcap style=”font-size:100px; color:#992211;”]G[/dropcap]ather round ye bunch o’ landlubbers, wenches, whelps and miscreants an I shall tell ye a tale which I swear o’ the lives o’ me crew be true.

Tis a tale of bravery, of action and most of all, of treasure…. Tis a tale which may not be fer the faint of heart amongst ye, so if yer stomach be tumbling more than the great waves in the mighty seas, or ye be of clammy skin, nae spine and jis jelly, ye best be leavin’ before we depart for booty and plunder.

Me story starts with me initiation intae the legendary Dread Crew of Oddwood, the most fearsome crew to e’er sail on the seas. Wi’ the wind in their sails and no fear in their hearts, the crew set forth on a great adventure and I were lucky enough to witness it all and survive to tell, because as they say, “Dead Men Tell No Tales”, nor do they sing of those deeds. With instruments of wood, nae need for amplification nor lightning from the heavens to make them sing their song, a good skinful o’ grog to loosen the lips, and a place to deliver this message, come gather round and experience the story I have to share…. The tale of The Dread Crew of Oddwood and their brush wit’ Lawful Evil. 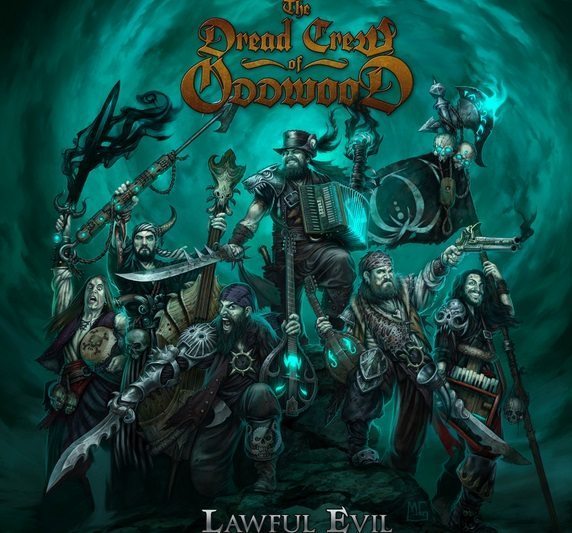 “Join The Ranks” Starts the album off, and as its title suggests, it gives us an introduction to the pirate crew who this album is about. With a very lively kick to it, the sea shanty style and folky approach works brilliantly. Radiating with energy and delivered at a brisk pace, the song pretty much throws you headfirst into the story. Giving a whirlwind introduction to the cast of this odd but intriguing musical story, the metal-like vocal delivery (with that slight pirate twang) goes hand in hand with the brisk and lively unplugged sound. In all, its an absorbing and fun opening track to draw you in. As the song says “Once you climb onboard your soul ain’t never coming back, so you best just leave your conscience to die!”

After raising the anchor and letting out the sails we shift into “Side Quest”. Telling a tale of pillage and plunder hunting, it’s all bright tone and jovial approach with a memorable chorus stuffed with harmony gang vocals. The way it comes across, it is almost if you are alongside the pirates: partying, stealing, killing and looting. The enthusiasm in the delivery is infectious and the way the story is played out in the music and the lyrics really paints a vivid picture of the action, essential for a concept like this.

“Heavy Mahogany” has a real kick and a memorable melodic hook which shifts into a fast-paced folky feel. The accordions and guitars really work their magic, dancing across the bouncing bassline and drums almost like they’re a vocal line in themselves. The real vocals are raw and tell a tale of action and the empowerment of combat. The gang vocal chorus has a little hook to it and is perfect for singing along to. With the engaging sound of the album, you’d find it hard not to sing along or dance to the energetic pulse of the song. The highlight of the track though is the barkingly insane and complex instrumental section, which features a flute and guitar trade-off spot. One can only imagine what the complex and quick delivery would sound like on an electric guitar.

“Sulfur” has another complex intro full of intricate sequences and energy coursing through it. Joined by gang vocal shouts, this brisk paced number has a slightly dark tone to it, but the sense of urgency and adventure is ever present. Lyrics recount more tales of heroic (or villainous, depending on your perception) deeds, bravery in the face of death and boasts of prowess in combat. With references to cannons and pistols, its every bit as explosive as its name suggests and it keeps the anarchic vibe ongoing.

“Siren’s Song” slows things down, bringing back that Celtic and folk feel with a haunting melody. Staying true to the lore surrounding the mythical Siren, it marks an unfortunate turn of events for the brave pirate crew who seem to be succumbing to the dangers of the sea. With a sombre but bright melody coursing from start to end, the melodic aspect of the track is solid. As for the lyrical delivery, sombre and serious in the verses but full on harmony gang in the chorus (with some great female backing vocals to augment the effect), it really connects you to the song. For those who may have become somewhat invested in the crew, it really pulls at the emotions! Around the three minute mark it gets darker, telling the tale of the Siren’s arrival. It gets still more dramatic as the carnage begins. A palpble sense of danger and urgency emanates from the battle, and the pounding rhythmic feel really hammers it in before the chorus hits once again to remind us just what dangers lie out there in the waters.

“Expedition On Heavy Submarine”, thankfully, brings us back to more lively proceedings. Bringing a more positive narrative twist, the dread crew unleash their secret weapon – the submarine. With tales of nautical combat, torpedoes, periscopes going down and exploration of the deep, it lightens the mood once again. The infectious rhythmic hook and sweet drum line provides the base for an epic outro sequence which would sound phenomenal on an electric instrument. That said, the way the guitars and accordions work together has a fantastic effect too. A gang vocal chorus really brightens the mood between tales of battle and monsters of the deep and, by the time we reach the depths, it is time to return to the surface once again.

“Humours of Oddwood Isle” takes us to the home base of our intrepid crew of miscreants, and that Celtic sound with folky flair and intricately arranged melodies gives us a brisk and lively welcome, almost like a heroic return and parade after accomplishing great feats of legend, forever to be immortalised in song. Sadly, this short-lived instrumental is merely an uplifting filler to bring us into the final track.

“Raise Your Pint” is a true pirate anthem. Brisk paced, hypnotic and infectious, it really grips you and trying to resist the urge to dance along is something which many will find hard. Telling the tale of pirates on a drinking session, it feels mandatory to grab a drink, raise it in the air and sing along to the chorus whilst swaying from side to side. With tales of never-ending beer in a tavern and how the party may never end, it has all the makings of a great drinking song and party anthem. With subtle melodies popping up here and there throughout the track, it really does draw the album to a brilliant close and leaves us with two simple messages – drink and sail on until we die, the true way of a pirate…. And of course, Raise your Pint!

So there ye have it, scurvy lubbers…. The tale of the infamous Dread Crew of Oddwood isle. Their heroic deeds conveyed in song, perfect fer any tavern in town and something fer ye who lack the guts tae journey on the waters to get attached to, so ye can vicariously experience the legendary moments of these scabby heroes. From joining them, to fighting along side them, to barely escaping with our lives after a close call wit’ the witch o’ the sea, bane o’ many a seafaring man…. To exploring the depths before a heroic return, capped wit’ a heroic piss up of legendary proportions, that be the tale o’ the dread crew!

Fer those who still don’t believe the truths I tell, listen tae it fer yer’sels and decide if this is merely folklore or truth.

Dead men tell no tales, and a pirate may deceive ye, but when they give their word, they mean it.

Previous Story:
Are You Gettin’ It? The Effects of Frequent Sex (with your partner) on Relationships

Next Story:
Tripped into the Door? Psychedelic Drugs May Reduce Domestic Violence