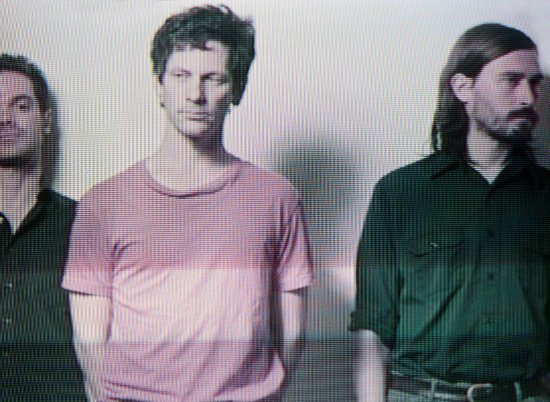 Minimalism is a curious concept.

In the current musical climate it usually manifests itself in the form of scratchy, barely-there snatches of sound and the vapour trails of vague melodies. It usually seems symbolic of musical retraction, tugged back from any hints of fleshy embellishment and focusing on the stripped bones. Surely there is no room for expansion within such fixed parameters? 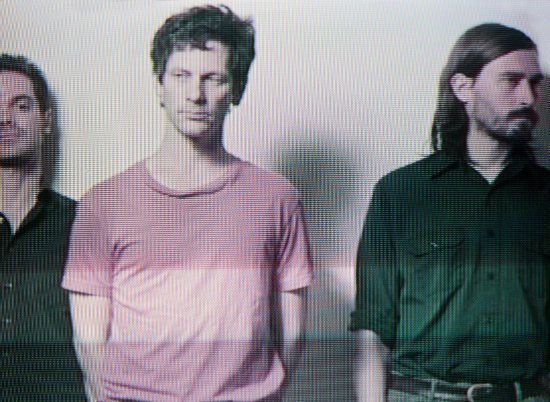 Where their debut, Lux, offered a collection of scuzzy, fuzzy three-chord melodicism, Guider strips this back to songs often based around no more than one note, but somehow, Tardis-like, seem to exceed the small space they allow themselves. It may seem to defy all logic, but there is a devastatingly potent secret weapon in their limited arsenal.

Disappears’ rhythm section are the true stars of this show. They lock each song into a deep groove that, at face value, seems unchanging, but actually warps, shifts and pulsates imperceptibly. The bass sound, above all, is stunning, clear yet dense, bouncing yet throbbing. The drums propel everything unstoppably on, often barely breaking pace for so much as a simple fill, in order to ensure each track remains subservient to the all-consuming groove. This leaves the guitars free to indulge in a cavalcade of pedal-driven wizardry, immersing each track in a fizzing technicolour fog.

With one notable exception, which I will come to presently, the songs on this 30-minute, 6-track album zip past in quick succession. This does not mean to imply that they are in any way unmemorable, however, in spite of the fact they seem to have only given themselves two gears to play with.

The title track is a spiky thrash, simultaneously soaring and scraping, a modus operandum employed to similar effect on the shimmering ‘Not Romantic’ and the abrupt ‘Superstition’, and providing at least half the musical DNA  of ‘Halo’, which gallops roughshod over a two-note background with several tonnes of FX on its back

It becomes apparent that Case is a man who, since the sing-speak of Lux, has evolved two distinct voices. For the punkier-edged tunes he employs a cracked wail, clawing desperately through the feedback miasma with an abandon akin to a post-Rotten, pre PiL John Lydon.

When the band shift into their other gear, however, so does Case’s voice. On ‘New Fast’, you get the first substantial taste of what happens when the heavy haze that sits over their sound finally settles and crystallises into a cosmic drone. The song is well named, as it canters along atop a lolloping bass, but remains entwined inexorably around no more than two notes. Somehow, it raises itself, whether by dint of sonic trickery or some strange sorcery, to an epic scale, seemingly lasting longer than its mere 2 minutes 47 seconds. Remarkably, the pulsating of the song is matched by Case, who deploys a monotone, mantra-like chant, rumbling somewhere beneath the surface of the song..

This thrilling appetiser is dwarfed, however, by the monolithic sensory overload that is the 16 minute ‘Revisiting’. It truly is staggering- it takes up a full 50% of the album, but represents the apogee of minimalism, winding its entire sinuous length about little more than a single note. Disappears obviously have no fear of repetition, preferring instead to hone it into an artform. It pulses at a steady pace throughout, but somehow I couldn’t help listening to it on repeat, noticing more subtleties each time. The whole track moves like a wave, rising and falling organically, rolling on the drums and bass and cresting with squalls of guitar sound. Amongst the swirling echoes, Case’s deathly moan surfaces and slips into the stream of sound

The rhythm section again drives the song through its entire course, the bass subtly altering the feel of the ride along the way. Major credit has to go to the drummer, though not for any percussive pyrotechnics, but for being able to maintain an almost completely straight beat for the whole length of the song without eventually exploding in a splurge of pent-up fills. ‘Revisiting’ truly is a skyscraping monument of a song, even though to call it a tune seems like something of an exaggeration, and pretty much renders any previous use of the word ‘hypnotic’ redundant.

Disappears are that rare thing- a band that can genuinely make less mean more, rather than simply less. Though their influences are plain and their facets are few, their delivery is impressive to say the least. Long may they march to their own endless beat…