De Profundis: The Emptiness Within The Emptiness Within is the third album by this British-based metal band. De Profundis describe themselves as "Extreme Technical Metal". The definitions of the myriad metal sub-genres can be a bit of a minefield in which this reviewer is in danger of getting well out of his depth. So the best thing to do is just listen to the record and try to describe what it sounds like.

The album beings with a menacing instrumental 'From the Depths', little more than a slow-burning sequence of doom-laden chords. It serves as an extended intro to the first actual song, the seven-minute 'Delirium'. This starts with a galloping riff that could easily have been an early 1980s NWOBHM band but for the growling death-metal vocals. Three minutes in, the heaviness drops away with a delicate semi-acoustic interlude leading into a beautiful melodic solo, before building up to a shredding climax. The following number, 'Silent Gods' follows a very similar structure, and sets the tone for the rest of the album.

could easily have been an early 1980s NWOBHM band but for the growling death-metal vocals.

Craig Land's death-metal growls work well enough on the lower end, but aren't always totally convincing when he attempts to sing in a higher register; the occasional 'clean' passages in a fragile baritone work rather better, sounding like a more delicate version of Andrew Eldrich (Sisters of Mercy). But this album is really more about the guitars than the vocals, and the  two lead guitars of Roman Subbotin and Shoi Sen deliver in spades, whether it's the great twin-guitar harmonies of 'Dead Inside', or the shredding acoustic solo on 'This Wretched Plague'. 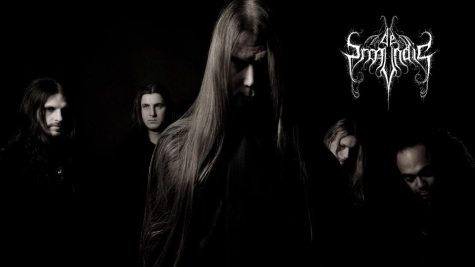 There's a jazz-tinged edge in places, such as the intro to 'Release' and parts of the instrumental 'Parallel Existence'. The latter is a highlight of the album, building into a swirling symphonic metal tour-de-force complete with a bass solo.  The album closes with the nine-minute epic of 'Unbroken (A Morbid Embrace)' which builds from a lengthy brooding intro, moving through swirling instrumental passages, ending in a delicate and atmospheric outtro

The music is certainly technically complex, although describing it as "extreme" is pushing things a little. Aside from the previously mentioned death-style vocals, the instrumentation is far closer to the classic metal of Iron Maiden than it is to someone like Meshuggah.

describing it as "extreme" is pushing things a little

There are tempo changes a-plenty. In many places it straddles the border between death metal and the progressive metal exemplified by mid-period Opeth, balancing brutal heaviness with moments of delicate beauty. The raw production gives something of a live-in-the-studio feel, although the very poor thudding drum sound is one of the album's weaknesses.

So, a good album, if not quite a great one. De Profundis owe a clear musical debt to Sweden's Opeth, and there is more of the 90s 'Northern Doom' of Paradise Lost and My Dying Bride than just the rather gothier-than-thou song titles. But De Profundis still have enough identity of their own to avoid sounding like a derivative copy of any other band.

On Kolony Records, May 7th