As this review is being written, Tweetdeck's pop-up window appears repeatedly to comment on the Tottenham, now Dalston, and seemingly soon-to-be Hackney riots.

The tweets range in their tone from dismayed to resigned; outraged to comedic. Comedy can be many things – a defensive emotional reaction to discomforting circumstances, thinly-disguised contempt, or the palatable wrappings of satirical observations too discomfiting to be assimilated in their raw form.

Tweets such as: 'Why would anyone riot in Dalston? Not enough ironic 80s clothing or something?' or 'Why are they attacking Nando's? Are they hungry?' are a panic reaction to events that threaten the status quo of the comfortable observer. The humour comes more easily than a dispassionate analysis of the social and financial circumstances that have led to these events. Other tweets are less self-congratulatory, more observant: 'helicopters are circling over Dalston, looks like things are kicking off', 'Rioters are chucking rocks at the police, I didn't think it would come to this'. There is also the usual scornful observation that it's all just pre-arranged rentamob troops piling in for a ruck.

Got the nerve to talk about the guns on the street
When the guns come cheap from the factory…
they don't check those facts, so they blame and they make
Scapegoats of the blacks.
Or anybody else who's fresh off the boat
Or anybody else who don't wish to vote,
For the moderate blues with designer views

Anyone who has spent time in Northern Ireland or another zone where riots are frequent, will soon figure out that there is a recreational, opportunistic aspect to rioting. The red-top press will make much of this. With enough effort, the photographs of flatscreen TVs being hauled out of broken Argos window displays by hoodie-wearing, dusky-skinned youths will draw attention away from the sense of betrayal, disenfranchisement, abandonment and outright hostility experienced by a significant number of Britons whose income resides in the tax brackets south of the bonds traders and hedgefund managers. But the fact remains, opportunism can move a mob to action, but only deep, durable anger can make a mob in the first place. 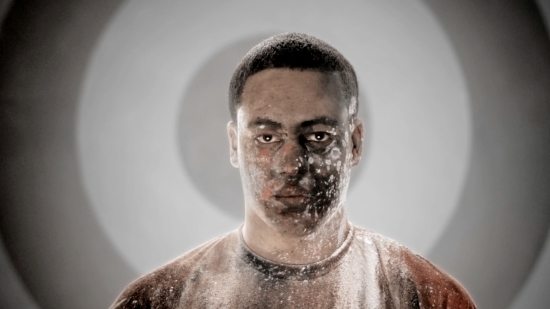 Much has been written on the seeming lack of political consciousness in modern music. The criticism is flawed. The politics are there in music, just not in the charts. Back when The Specials released 'Ghost Town', their veiled critique of Thatcher's dismantling of northern pit towns struck enough raw nerves to make it an instant hit. Art must always reflect society, comment on it, make sense of the unspoken, unclear and intangible truths which affect and motivate the population somewhere beyond the realm of conscious, lucid thought. In 'Ghost Town', just the line 'Do you remember the good old times before the ghost town?' was enough to vocalise a sense of castration felt by the populations of just about every town from Liverpool to Dumfries. Whether you came from a docker's town or a miner's, the song put into music the mood of the time. 'Capsize' does something similar, although without 'Ghost Town's veiled (radio-friendly) criticisms. DELS is anything but vague. In 'Capsize', the gloves are well and truly off:

Looks like we're all fucked, no lube
Cameron better steer clear of my arse

What 'Capsize' makes clear, as does the album as a whole, is that the simplistic cliches of the golf-club bores (it's just the wogs; it's the same crusty Socialist Worker rentamob turning up at all the disturbances; it's the Arabs selling themselves as the only alternative to the liberal free-market model; it's just students letting off steam; etc.) are no longer acceptable. DELS' world, in the single and on the album, is one in which being disillusioned with cruddy dead-end jobs, social immobility, the old boys' network ruling the country, the ghettoisation of marginal constituencies and the preferential treatment meted out to white collar criminals is not an affliction only experienced or expressed by a sector of society which shares a similar density of skin pigmentation. DELS makes it quite clear that the malaise is universal, and shared.

Such anger, such vitriol, such justification. All the more cutting in that it comes from this eloquent, lucid source. Few are mentally better placed to fire this shot over the bows as ex-teacher Kieren Dickens, flinging out the scalpel-sharp, witty and satirically comedic lines which pepper this eviscerating single. Better again, the featured lines from Roots Manuva's Rodney Smith bring a heavyweight punch to bolster Dickens' more contemplative approach. Add to that Joe Goddard's (Hot Chip) synth riffs dropping the late night fervour of a Soft Cell anthem into the tune – the track is as near to perfection as British hip-hop is ever likely to get.

The remixes coming with the release range from the maghreb-evocative, unsettling darkness of the Lucasse Island version, through dancefloor-friendly (Entrepreneurs mix), trancey washout (Marla remix), to the downright silly re-imagining of the track by Minotaur. The original is worth the price alone, as is the album.

Radio One will most likely not be allowed to play it, at least not during the daytime. Buy it, get it to number one, make it your generation's 'Ghost Town'.

Or be part of the problem.