New Order. Their set is fuelled by absence’s tension from the outset but Bernard Sumner is making light of this. After the group are introduced he quips “apparently we’re New Order, we’ll do our best for you tonight”, referencing absent bassist Peter Hook ( who’s litigating for rights to the group’s name ). 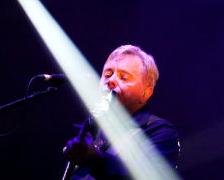 With the firm hope he’s not singing about the Olympic legacy we can declare Blur’s performance a triumphant combination of their jubilation and pathos and a fitting finale to perhaps the greatest Its A Knockout there’s ever been.

With added pathos here because this may be Blur’s final gig, we should spare a thought for another group wondering whether to stay or go, namely New Order.

Discounting poor Bombay Bicycle Club, possibly chosen only because their initials are BBC, a best of British line up has been cleverly assembled as a kind of Olympiad of influences leading to Blur. Think of The Specials‘ jerky punk/ska contribution to Blur, as well as their social realism.

Then there’s New Order. Their set is fuelled by absence’s tension from the outset but Bernard Sumner is making light of this. After the group are introduced he quips “apparently we’re New Order, we’ll do our best for you tonight”, referencing absent bassist Peter Hook ( who’s litigating for rights to the group’s name ).

As ‘Elegia’s’ first notes emanate sylphlike from Gillian Gilbert’s Fantom G7, then descend heavy as an Olympic hammer for ‘Crystal’s’ clear cut yet appealingly gravelly electro rock, Bernard is looking a bit lost amidst banks of their trademark high-end technology, though with still piercing blue eyes, a diminutive presence.

This has always been part of New Order’s appeal, that of frail human hearts inside machine technology and ruthlessly engineered beats, but as Stephen Morris sends down volley’s of rimshot hail for ‘Ceremony’s’ intro, the guitar chime and motorik rhythm are dashed off with magisterial precision, infecting to the marrow with doom and euphoria.

Their first single, the song brings a chill to summer air, a Joy Division song after all.

‘Isolation’ then, also a remix of a Joy Division track as stroppy guitar rock, while after the ominous Kraftwerk hum of the intro, ‘586’ is also rocked up. With New Order also daddies to rave, and uniting multiple genres ( they’re a canny choice for this event ), plenty of dads are dad rocking.

The visuals are referential to the past and haunting. For a rapturous ‘Blue Monday’ (after a euphoric ‘Bizarre Love Triangle’, where the hyperreal coloured video goes to the heart of a speeding city), the backdrop shows a hand sweeping barley against an azure blue sky, a mix perhaps of the beckoning hand on the inner sleeve of Joy Division’s Unknown Pleasures and New Order’s sometime Balearic sky thinking.

This thought comes around for a moving closer of ‘Love Will Tear Us Apart’, where images of Ian Curtis combine with the text ‘Joy Division Forever’, cut in a Trajan-derived font similar to that used on their record sleeves. Born out of the disaster of Ian Curtis’ suicide, and with Peter Hook seemingly out of the family picture, there’s a full circle sweep which brings in bags of goodwill for them, whatever the family politics and squabbles.

Their pioneering sounds, which helped bring the future (with help from Peter Saville, Tony Wilson, Alan Erasmus and Rob Gretton ) before it had happened are still cutting edge , and in whatever form the reunion continues, they clearly still have it in them to take on the world.