Subverting the Domestic: The 2:1 show at Safehouse 2

A shattered yet still comforting vision of domesticity conveys the reality of contemporary urban life. Review

[dropcap style=”font-size:100px; color:#992211;”]T[/dropcap]he Safehouse spaces in Peckham seem to be frozen in a state of curated dereliction.

At a glance they appear as any other house, but their interiors are skeletal and picked clean of all fixtures, carpets and wallpaper. Only the functional features have been retained- the staircases, the doors, the walls stripped back to the laths. The feel of this peculiar space was cleverly exploited by 2:1, an exhibition by a loose collective of artists who recently exhibited.

The show, which opened on the 27th May, was dominated by site-specific sculpture and video installations, connected by their engagement with ideas of ‘home’ both in an abstract and a material sense. 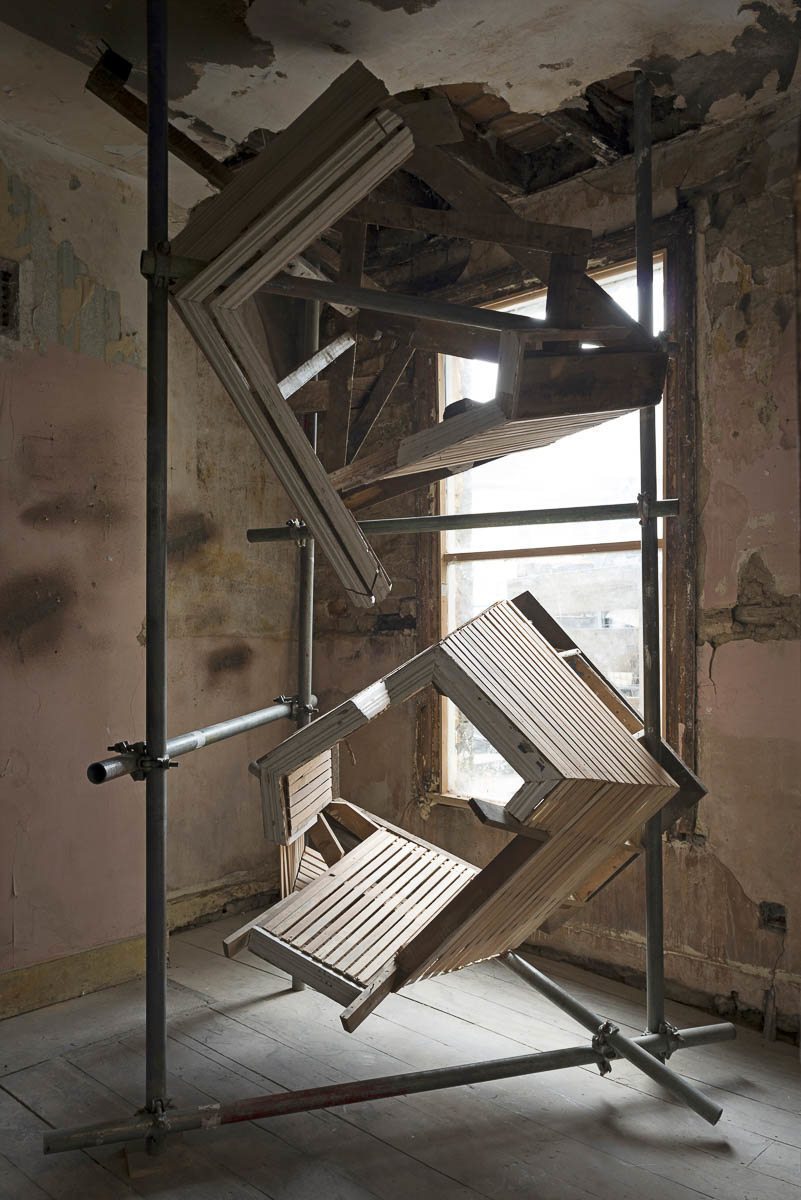 Both the space and the work seemed set on making the familiar strange; in some cases the pieces displayed and the space itself merged to form a unified object, united by their material similitude.

Henry Burns’ piece ’82 screws’, consisting of two forms stacked on top of each other and built of salvaged door frames, wall laths and wooden beams was the clear apotheosis of this effect. It isn’t clear whether these forms are assembling or disassembling, whether they signal the destruction of familiar, comforting ideas of the home, its basic material elements collapsing into an unseen point below the ground, or whether conversely they are exploding outwards from this same point, which functions as both origin and end.

This multidirectional reflection on domestic space using the basic material components of the home proved to be a thoughtful and effective introduction to what I saw as the curatorial ambitions of the show.

Many young Londoners have a precarious relationship with the idea of a material ‘home’, with financial situations often forcing people into dodgy sublets and short-term occupancies, thus the physical cocoon of the home cannot be necessarily relied upon as it was before. Flo Sweeney’s ‘Hot Bed’, which occupied an upstairs room at Safehouse, starkly reflects this sense of instability. The bed, an ultimate source of comfort and refuge, appears soft, but the lateral cracks running across it that issue disturbing buboes of expanding foam reveal this bed to be fractured and brittle. 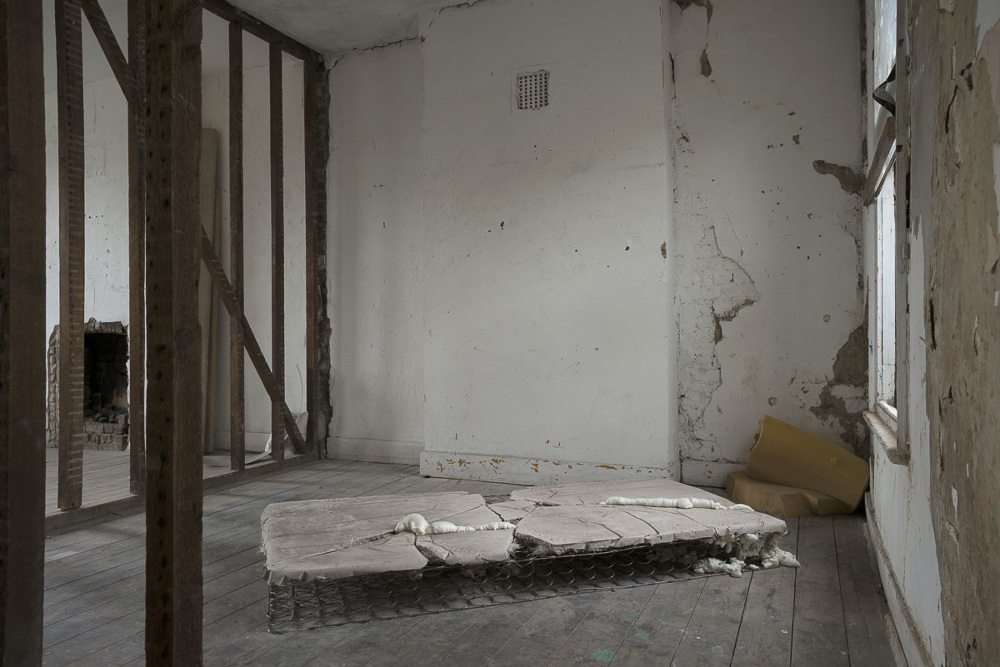 Harriet Foyster’s ‘Alien Horse’ appears warm and nostalgic, an old TV monitor playing a softly narrated film showing traditional logging methods. But the narrator’s voice becomes cold and disturbing to the listener once its message of controlling workers and their emotions for the sake of economic productivity is picked up on. These comforters, points of escape for a human being living in the modern world, intensify rather than dissipate a particular kind of despair that the domestic space should traditionally be able hold off.

Fortunately, all these impressions did not dissolve into cheap, rudderless pessimism. The show was leavened not just by the directional ambiguity of Burns’ dominating piece, but also by the witty collaborative installations which the exhibiting artists had collectively assembled. Using the same kinds of salvaged timber found elsewhere in the show, they built a table and stuck to its surface several artistic and curatorial aids – notebooks, maquettes, empty biscuit packets, before turning it upside down and fixing it to the ceiling, complete with a chair. This, combined with the (functioning) shack bar built from sections of parquet flooring and old window frames, as well as an inverted stepladder stuck to the wall and repurposed as shelves, reflected a new sarcastic domestic of the artist-curator.

In order to complement the other pieces exhibited, and the complex feelings of instability and uncertainty that they intone, these installations were full of determination, resourcefulness and humour. They directly signposted the acts of curation and installation while mirroring the disorientation via physical reorientation of basic domestic objects found throughout the show. Their intentional lack of subtlety struck me as warmly confident; they seemed to me unashamed expressions of the desire to express, regardless of the constraints faced, material or otherwise.

Previous Story:
For Teenage Boys: The Proven Way to Double Your Female Friends