[dropcap style=”font-size:100px; color:#992211;”]F[/dropcap]ifty years after its initial release the Beach Boys masterpiece is picking up plenty of airplay.

I just heard the infallible Don Letts play a track on his Radio 6 Culture Clash show. Brian ‘the lights are on but nobody’s home’ Wilson is currently hauling his bulky frame and damaged vocal chords around the festival circuit to promote the album. I won’t be in the ticket queue this time around.

As previously noted, the songwriting, harmonic interplay and sophisticated orchestration lift the work well out of the range of 60’s nostalgia, yet, strangely enough, it is the nostalgic tone of the record which gifts it a curious magic.

Best expressed in one word: Yearning

Before the coming of amplified guitars in the hands of rebellious teenagers, yearning was a dominant theme in popular music. This was largely sociological. Lovers were kept apart by wars, social distinction and over-protective parents. Often they did not see each other for months or years and had to communicate by letters. Professional songwriters and performers honed in on this emotional gold mine and produced a wide range of classic material based around separation and loss. 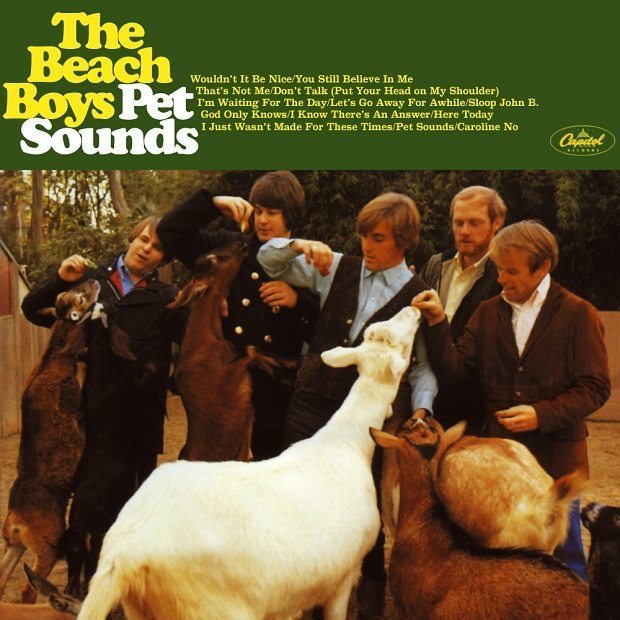 ‘Barber Shop Quartet’ style by his monstrous father Murray. I loved the early upbeat Chuck Berry influenced singles by the Beach Boys and, frankly, was a little shocked when I heard Pet Sounds for the first time.

But it got to me. and confirmed a lifelong love affair with all aspects of the California dream. Even now the song ‘Caroline No’ squeezes moisture from my eyes in a way that no other song can. This is because it expresses, in an elegant musical form, the sheer impossibility of turning back time. The film sorcerer Kenneth Anger has opined that control over time is the true aspiration of all magical disciplines.

And time can be exquisitely cruel in its manifestation. Brian was cheated out of the kind of California dream his early songs expressed by both anatomy and an abusive parent. In ‘normal’ people, such matters are absorbed into the framework of what we call personality, not turned into the highest art.

And there is a twist implicit at the heart of the Pet Sounds story.

No – not the cover: ‘Hey guys, ground-breaking album, sonic masterpiece, so let’s all go to the zoo and take a photo of you feeding farmyard animals’. There is a great article to be written about bad album covers, but now is not the time.

By twist I refer to the Beach Boys youthful optimism abruptly becoming adult in tone. Pet Sounds saw Brian asserting his considerable musical authority over the musical and emotional dominance his father/manager/producer had exercised over the act since its inception. Murray Wilson wanted the band to retain its hit formula and resented Brian’s restless creativity. The irony is that the yearning tone of the album goes completely against the grain of the upbeat sixties and, in fact, is a perfect representation of the music Murray Wilson adored.

Brian beat his father with his own stick and created a timeless song-cycle with a couple of nifty instrumentals thrown in for good measure. If I could stop time right now, I could do worse than wish for a moment when computers were the size of office blocks and ‘Good Vibrations’ was a faint shimmer on the Event Horizon.

Next Story:
What Does a Two Kilo TNT Explosion REALLY Look Like? (US Army Photos)