A few weeks ago, we touched on the underground musical scene in Iran, especially with regards to the rock/metal area of the musical spectrum (courtesy of Heterochrome, the Tehran-based progressive metal band).

This time, we touch upon it once again from the perspective of a band who managed to breakout from behind the shroud of oppression in the middle-eastern nation after garnering significant international attention and re-locating to the west coast of America.

Tarantist, derived from the word ‘Tarantism’, (defined as “a mania characterized by an uncontrollable impulse to dance, popularly attributed to the bite of the tarantula”) is seen by many as an apt description of this four piece’s musical style and approach. After forming and cutting their teeth in the precarious yet defiant underground music scene of the Iranian capital, the four piece’s reputation spread via word of mouth, eventually garnering international music media recognition ranging from the mainstream metal and rock publications such as Kerrang! and Metal Hammer to news and media giants SKY, CNN and even the BBC!

Combine this attention with the decision to relocate to the US, and add in the energetic alternative metal created by the four piece who have shared the stage with the likes of Stone Temple Pilots, Sum41, Metallica, Motörhead and Voivod, you can see that there might just be something special about this band.

Not A Crime, the band’s fourth full length release, is rather different to the previous approaches Tarantist have taken to music. Usually, the band performs and releases their music with English lyrics, but for this release they have paid tribute to their roots, performing it instead in their mother tongue, Farsi. Bassist/Vocalist Arash explained that the decision to perform in Farsi was a nod of respect to those still in Iran, paying back the support of the Farsi community and also using it as a way to counter the propaganda the regime in Iran is throwing out, giving those who cannot speak freely a voice of their own.

This view makes perfect sense when you look at the social climate in the region, the tensions there, and the personal experiences of musicians and those wanting change and the freedom of expression. The album’s title says it all – music (even if it is terrible) is not a crime.

So, background/politics/exposition aside, it’s time to get to the music!

Alternative Metal is a pretty wide ranging description for a style of music. Whilst prior releases by the band have been likened to groove and thrash metal, the best way to describe/genre pigeonhole Not A Crime would be to say it is a mixing pot of several approaches. There is a big electronic influence in the pseudo-goth/synth/industrial aspect of things, leaning heavily towards the likes of Rob Zombie, Marylin Manson, Sisters Of Mercy and Rammstein. There is also a dose of avant-garde extravagance, much like the mania presented by those masters of all things odd – Frank Zappa and Captain Beefheart. Throw in some generic sounding metallic riffs which a whole host of bands from the early 2000’s could have ground out and you have the sonic aspects of this release. 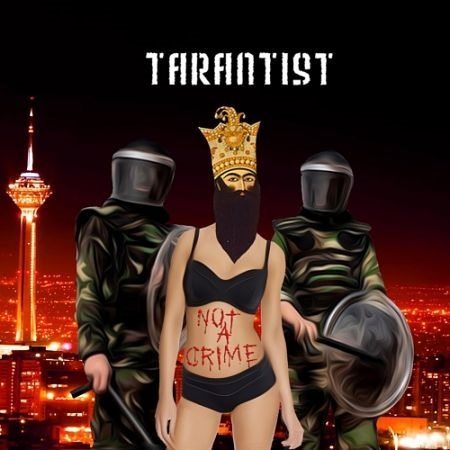 To detail this rather unique musical mixture, there is a huge focus on diversity. A massive focus on the low end of the sound registers in the form of rhythmic and hook-laden basslines with a wonderfully rich and deep tone to them. They form the spine of this release from start to finish. There are plenty of subtle and quirky uses of modulation effects on the guitars and bass and the samples also, giving it a rather quirky nature and certainly making it rather fun and memorable. When it does decide to get heavier, the distortion is thick and harsh.

Vocally though, it is very intriguing. The use of Farsi certainly adds a new twist to things, giving it an exotic flair vocally where usually such a thing would come instrumentally. The delivery of the vocals when both clean and growled is very reminiscent of Teutonic titans Rammstein, and the shifts from clean/melodic to pounding heaviness certainly follows in this musical vein at times. Notable tracks like “Not A Crime” and “Hey You” are laden with the quirky modulated guitar melodies and hook-laden basslines. “Disappointment” has that moody electro-goth darkness vibe to it but is loaded with a vibrant energy. “Summer” has the pseudo-glam/shock rock air of Manson and Zombie, leading the way with some massive, synth heavy choruses and slick distorted guitar riffs.“I Become God” is a more reserved/restrained number, opting to lead with a more string sample-based approach and leaning towards atmospheric impact.

In all, it’s a very unique album with a few interesting tricks up its sleeve. The composition and expression of ideas in the music is well placed. The clever use of modulation effects to give a more fluid soundscape, which works by highlighting the rhythmic magnetism of the bass lines and drums, is a selling point, along with the diversity of approaches used. The foreign language delivery is also another plus, giving it that memorability and intrigue factor.

Sadly, this doesn’t entirely offset the bland feel of the tracks not mentioned, nor the overall jumpy feel, making several sharp musical turns and not really having a more settled flow through the release until near the end when the more familiar metal approach becomes more prominent.

This isn’t a reinvention of the wheel, but it is a revolutionary moment for music – a band who escaped Tehran paying their dues to those who supported and those who deserve a chance at hearing something else, a different point of view, conveyed in a tongue which can be easily understood by the oppressed and fearful.

Whether Tarantist are to your tastes or not, one thing is certain, they certainly prove that music is NOT A CRIME!