The ideology of imperialism runs deep in Bowser. He is also, at least, a kidnapper, but more probably a pedophile.

[dropcap style=”font-size:100px; color:#992211;”]T[/dropcap]he first westerner to battle evil reptilians was an Italian plumber from the sewers of Brooklyn.

David Icke has never acknowledged Mario as the original fighter for humanity, but Mario and his brother Luigi have been at it since at least 1983. In the first Mario Brothers we see the introduction of Bowser. Physically, he doesn’t seem to share any traits with those of the Draco Constellation, but his attitude is cold-blooded and his obsession with fire raises suspicion. The ideology of imperialism runs deep in Bowser. He is also, at  least, a kidnapper, but more probably a pedophile. Even before his Koopa Army sacks Mushroom Kingdom, Bowser’s first move is to kidnap Princess Toadstool.

I don’t believe his intentions were good.

The reptilian agenda angle wouldn’t become clear until 1988 when Super Mario Bros. 2 was released. The same cast of creatures return, but with them come new recruits. 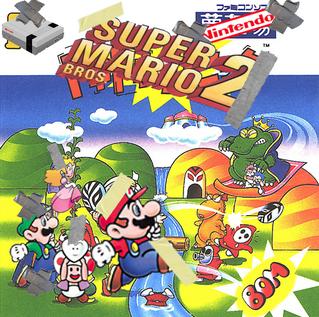 King Wart in particular. The cover art for the Japanese box of Super Mario Bros. 2 shows King Wart sailing down from a floating Persian palace. He has the body of a frog but his nose breaks wide and pronounced like that of a lizards. He is twice the size of Mario. His crown is gold. It appears that the trim of his coat is gold. The land that he and his army posses is dull and browning with evil.

A river separates the good guys and the bad guys. The grass on the side of good is green, mountains grow tall and look lush with life. Even the river appears to curve further. But Mario and co. are outnumbered. It seems the final onslaught is at hand. Humanity vs. … a reptilian army? All faces are drawn with fear or violence. Except Toad, who is climbing a vine towards the clouds where the sky is blue. It is a peaceful sky. Toad appears to be reaching enlightenment.

If this all sounds biblical to you you’re not alone. Numbers 13:32,33 says: “The land, through which we have gone to search it, is a land that eateth up the inhabitants thereof; and all the people that we saw in it are men of great stature. And there we saw the giants, the sons of Anak: and we were in our own sight as grasshoppers, and so we were in their sight”.

Anak, thought to be the current and debased wording of Annunaki- “those of royal bloodlines”, “the seven judges of hell”, the demons from deep space who genetically manipulated themselves and apes to form “homo sapiens”.

This can all be interpreted in more ways than George Bush’s recently leaked self-portraits. What I’m sure of is that Mario was one lucky plumber. Usually when the man comes back from the burning bush screaming about reptilians in the sky, he’s short on company. But just ten years later David Icke got the pinging in his head.

After some traveling Icke was struck with what a Christian might call divine intervention. His body shook, his future was laid out, and a thought came that said, “it will be over when you feel the rain”. It rained. Icke was ready to awaken the world from the deep, dark, comfortable sleep we had all gotten used to.

Now, without a doubt to Icke and probably most of his 200,000 Facebook followers, there are reptilian-humanoids everywhere. They live in the hollow center of our earth. They feed off of our energy. They promote degradation and pain.

They are the physical form of Capitalism.

Icke went public with the reptilian agenda in 1999. The earliest account of reptilian abduction I could find was by a woman from Australia who dates her first abduction to 1992. Her account reads like the bad end of a human-trade alley in Calcutta. “They prey on the liver, the spleen, and focus special attention on the heart”. She describes her captors as having, “reptilian characteristics, tall, dark and very evil looking.” Her account spends little time describing the sexual abuse, which if true, is not surprising.

The Australian is not an isolated case. A quick Google search will show that at least hundreds of people have shared something horrible. A man named, “P.R.” actually recorded audio of his sexual assault from the reptilians. He claims to have specific information on the reptilian penis but his account offers no details. David Worley, a real maverick in the field of alien abduction research, tells the story of a woman he interviewed. A 17-year-old named Amy. Amy’s account gives first-hand witness of ejaculation. But her rape, like many, occurred unconsciously.

I was curious how a two-legged reptile could get away with a sex crime. Obviously attacks on the street would be difficult to disguise. Even buried in an iPhone people might notice a 6-foot lizard chasing a screaming woman. But the reptilians have low friends in high places. Those that haven’t mastered the art of 5th dimensional teleportation sex wear disguises, and apparently they’ve found a sex-change surgeon in California. The technology didn’t start there, though. According to Dulce base (New Mexico) security officer Thomas E. Costello, “sex-change technology first originated within the Dulce base, where Reptiloids and CIA/NSA scientists collaborated”.

The employment of multidimensional travel and mind control is a difficult one for me to understand. The Matrix movies dive in a little. Lost confused me as well but it was on TV so I assume they knew what they were talking about. It’s the hologram theory that comes up a lot but no one ever really explains. We’re seeing a manipulation that some claim to “break on through” in the bouts of a heavy Ayahuasca trip. To prove or disprove anything when you first need to prove or disprove time suspension is impossible. But being a vegetarian may help.

With sex crimes not taken so seriously in the United States (see Steubenville Rape Squad) there’s little surprise our government offers no information on how to deal with inter-cosmic sexual relations. But I’m surprised about a lack of response-for-profit. We do love guns. Waterboarding another human makes some liberals uneasy, but I think torturing a raping-reptile might relax some of the hangups Americans have with the subject. I’m pretty sure if they put a turban on the reptile’s heads, rape or not, Halliburton could have their next century of no-holds-barred war.

With all of that to consider there’s only one conclusion: They’re in on it. But who exactly? Interpol gives nothing. I tweeted Anonymous and asked them to look in to it. A rumor circled a while back that the next batch of Wikileaks were dealing with aliens. It’s curious that after the videos of US soldiers targeting children, backstabbing commentary from all politicians, international school-yard wedgies from all ranks – Julian Assange went down before the alien files came out.

This conspiracy is said to go from Kris Kristofferson to the Vatican. The banking families, to Jay-Z, to the Nazis. Every single member of Government ever. Except Bill Clinton. Bill Clinton is a real dude. It’s his wife with the split tongue. A fairly rare case of reverse gender control at the hands of the reptiles.

In one David Icke forum I read eighteen different theories about why the Queen Mother was buried in a coffin much larger than her body. The consensus seems to be it was so they could fit her tail.

There is a lot of speculation on the internet. What I’ve taken away most is that something is wrong. Do I believe David Icke? Do I believe in a reptilian agenda? Sure. It makes as much sense as anything else. As I type this very sentence North Korea has just detonated an underground nuclear bomb that caused a 5.1 Richter scale earthquake. How did they do that if the earth isn’t hollow? Hmm?

I find it easier to believe that the Bush family, the Rockefellers, Henry Kissinger, are not humans. Humans don’t get the pleasure out of pain like they do. And when humans make mistakes they apologize and they try to fix them. The government spends a lot of effort in convincing us it’s each other that we need to fear. But I’ve walked a lot of city streets at night and I made it to dawn unscathed. David Icke works towards a goal, and believe him or not, his goal is to help humanity.

I’d put my faith in a lost cause like that any day.

Next Story:
Opioid prescription is on the increase