In the spirit of a previous article, I’d like to clear up another commonly misused musical term: polyrhythm.

It seems to be used most often in relation to African music, usually in sentences along the lines of “Sub-Saharan polyrhythmic drumming of incredible complexity!” – where the writer is obviously startled that “primitive” people could do something complicated.

It is also (mis)used by reviewers as a convenient term for denoting an artists musical complexity, without drawing a comparison to prog rock, which would obviously be disastrous. It’s much safer to say “she creates intricate, polyrhythmic pieces….” or something,  rather than saying anything about changing time signatures or wacky harmony, as this will invariably bring on visions of Rick Wakeman in a cape, soloing intently.

Simply put, music that is polyrhythmic contains two or more different rhythms playing simultaneously. There are all sorts of extra details you can get into, but essentially a song played by a band is polyrhythmic if there are vocals, guitar, bass and drums all playing together (as long as they are not playing the exact same rhythm). Even vocals and piano accompaniment should be described as polyrhythmic.

Whilst this might be technically true…in practice the music won’t necessarily sound that way, as it’s likely that the music will be organised as the vocalist singing a melody with the piano supporting them…the two instruments will move more or less together in the listeners intellectual space, to form the piece.

Truly polyrhythmic music has a sound, and a way of listening. It appeals to some peoples ears more than others. For this sound you need two or more rhythms playing together that contrast with each other (such as using different divisions of a large number of beats, like if you have a 12 beat pattern you can divide it into 3 groups of 4 beats, 4 groups of 3 beats, 6 groups of 2 beats etc etc…and of course you can mix all these combinations up however you like).

Or you can go off the scale and combine loads of wildly contrasting ideas and see where that takes you. In my experience, when you write music that has more than 3 or 4 layers of stuff going on at once, it all homogenises, and the listener is likely to comprehend it as one lump of stuff, rather than 4 discreet events happening together. The fun lies in creating a process which the audience can follow, but also enjoy as pure sound. One or the other is obviously fine…but creating something that can be enjoyed on different levels is to create durable art.

Truly polyrhythmic music has a sound, and a way of listening. It appeals to some peoples ears more than others. 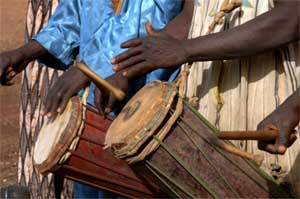 Imagine a solo instrument playing a tune that is really complex and hard to follow. Then imagine you can add another instrument, playing a different but equally complex tune. Then add another…and another. It’s quite hard to hear it in your head…because it’s too much information to keep track of.  It’s like listening to three people reading different texts at the same time – you either end up focusing on one voice, or you start jumping between the voices, and only hear snippets of each text….you end up with less than the sum of the parts.

In fact, rather than being a measure of complexity, comprehendible polyrhythms require the source materials to be simple. I might even go as far as to say that in order for the polyrhythmic whole to be enjoyable to listen to, the more layers there are, the more simple each layer has to be.

So far from being a measure of super-advanced musical thinking, polyrhythm tends to suit either relatively loose improvised settings, or the very measured, considered balancing of basic elements. And as for those Sub-Saharan guys and girls, I think they play like that because it’s fun, it sounds good and feels good to play and dance to.

Previous Story:
Inevitable End – The Oculus
Next Story:
Science: To bluff, or not to bluff? That is the question