What do you get when you mix modern celebrity with traditional Islamic design? Faceless stars? Or celebrity with depth? This isn't a joke by the way. 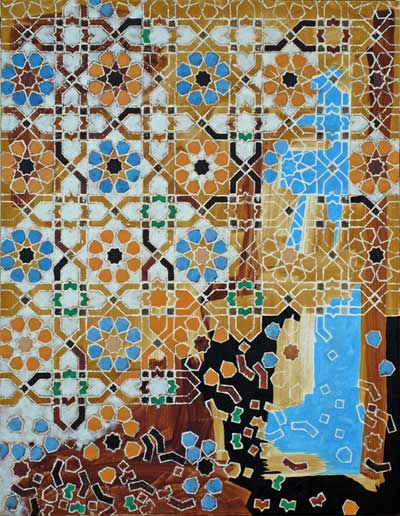 John Squire needs little introduction. Guitarist and songwriter of the band he described in his 2009 anti-reunion protest piece as, “seminal Manchester pop group The Stone Roses”, Squire has been well-known for his artwork, designing many of the band's sleeve covers, with his more painterly pieces inspired by Pollock's action style.

However, in recent years Squire has made it blatantly clear that art is his new love, stating, “Music is a young person's game.” So, with several UK and international exhibitions under his belt, Squire's latest exhibition, Celebrity, offers a series of works inspired by the ancient and mythical eight pointed star, employed to represent famous and recognisable subjects; from Keira Knightley and JFK to Woody Allen and Einstein.

The eight pointed star has straddled symbolism and religion for centuries. For traditional Islamic artists, this focus on pattern and geometry was a method of avoiding all forms of idol worship, since depictions of Allah and Mohammed are forbidden in the Islamic faith.

I applied this concept to the gods chosen by modern Western culture; those whose stories have been told and retold and whose images have been mass produced to such an extent that they are granted a kind of immortality” John Squire

Celebrity ingeniously re-presents the very familiar in a very unfamiliar way. In fact, on entering, I had no idea what to expect. I'd heard the word celebrity and knew there'd be paintings, so when I first saw geometric patterns I was puzzled to say the least. 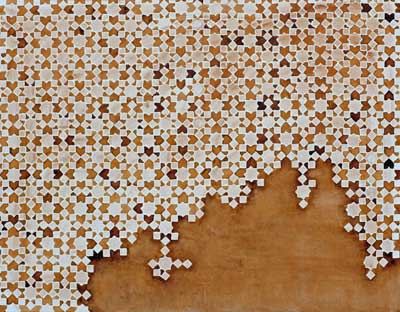 The first piece that struck me was a white canvas with black patterns stamped across it, creating a shadowy x-ray pattern. There was something unclear. Something eerie. When I checked the name it read, “Magda Goebbels.”

On the lighter side, one image I found particularly fun was a dense sequence of eight-pointed stars and rectangles with one corner broken open. I was damned if I'd ever guess the celebrity, so I checked the name: Arnold Schwarzenegger. I found myself grinning.

I suddenly saw the shattered corner as a gunshot blast. I imagined Arnie with a shotgun and shades causing carnage. This was fun. I quickly turned the exhibition into a game; to read the names and find the personality inside the pattern.

Another image, very much like Arnold's, but more intricate, was collapsing under its own weight. I checked the name: Woody Allen. Later, I studied the biggest canvas in the place. It had the same pattern, but on a huge scale. The name: JFK. I wondered if Woody was a smaller, unstable JFK, or if JFK was an over-sized Woody. On reflection, both possibilities are equally disturbing.

The works which struck me the most, without knowing whom they represented, were Richard Prior and Keira Knightley. Prior is a tornado, a whirl of black lines and shapes cutting from left to right. It has a dynamism of its own. Kiera on the other hand is a delicate mosaic, something you'd find in a Roman bath. 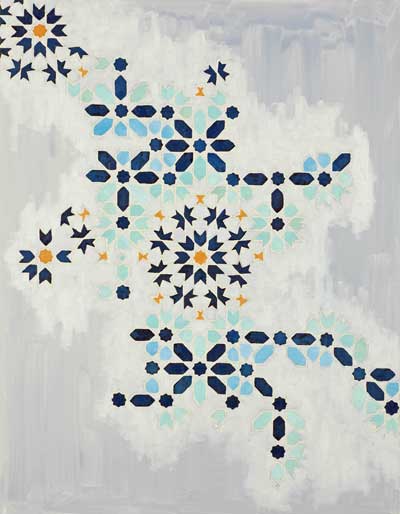 Less inspiring was Houdini. The piece looks like the bottom of a Victorian swimming pool 120 years down the line, faded and missing pieces; while Harold Shipman makes a striking, stand-out piece. Probably not what everyone wants on their mantle-piece, but it possesses a weight of its own, a solid pattern against a brown background. Only the bottom right corner, where the pattern briefly breaks-down, suggests anything amiss. 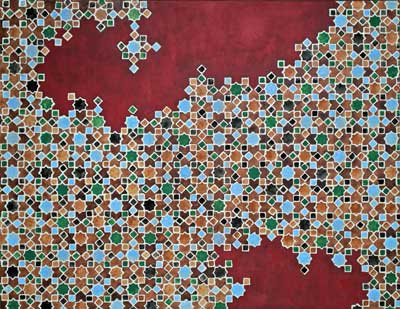 Taken as a collection, Celebrity is certainly something different. It gives one food for thought, and the thought that sticks with me most, is whether exploring celebrity in this way lends depth to something that is undeserving of depth.

Celebrity is for the most part vapid. And while I understand Squire is reflecting on the nature of idol worship, does the exercise simply add more mystique to something that is already so overly gilded as to make the very exercise redundant?

To what extent is he trading on celebrity, even his own, to get attention for his work? Would anyone really go along to this exhibition if it wasn't by John Squire, famous, whether he likes it or not, as a former member of “seminal Manchester pop group The Stone Roses”.

Whatever your reaction, Celebrity certainly makes you think. Squire redefines your relationship with celebrity, if only temporarily. He penetrates the surface of a world that so often is only about surface, and finds something to play with.

All images Copyright of John Squire.